Making a Great Concept Even Better 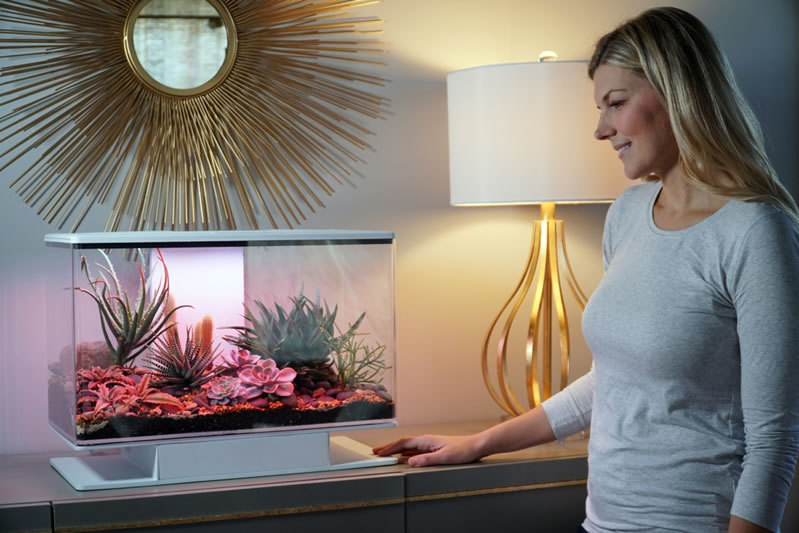 One of my hobbies and great passions is gardening, so I was thrilled when Rhode Island software developer Suriyont (Suri) Mujjalintrakool brought his connected terrarium prototype to Enventys Partners.

One of my hobbies and great passions is gardening, so I was thrilled when Rhode Island software developer Suriyont (Suri) Mujjalintrakool brought his connected terrarium prototype to the Enventys Partners office in Charlotte for development and marketing services. Dubbed the SmartTerra, the IoT-enabled terrarium brings the beauty and theater of the natural world into a perfectly controlled environment to be enjoyed in the home or office.

Suri and his partner, Chattrapat Jirathanyapat (nicknamed Moo), did a great job building a working prototype. The marketing and development help would maximize the device’s potential.

Suri and Moo wanted to create a terrarium that was peaceful and beautiful while being maintenance-free. “Just having a regular terrarium is not good enough for me. … I had to add something, some sense of nature into it,” Suri said.

The prototype they built to prove the concept featured an Arduino (an open-source platform for building electronics projects) as the base for the control system and had an LCD in the lid, with a knob for user input. Suri programmed different themes to change the color of the LED lights for different moods and even created a rainstorm routine that would flash the LEDs like lightning and engage a pump to sprinkle the terrarium in light rain. It even had speakers to play soothing nature sounds and thunder claps during the lightning storm.

The terrarium had all of the functional elements he wanted, but it needed a little extra to be successful in a crowdfunding campaign. The challenge for the Enventys Partners development team was to keep the core of Suri’s great concept and function but add smartphone control and feedback to the device—and create an iconic and inspiring design.

The re-design started with the industrial design team. Led by Rae McNeil, the design team thoroughly explored a number of different forms, shapes and aspect ratios. The purpose of the device is to let the form of the plants dominate, so simple and light forms quickly became the preferred options.

“When designing the SmartTerra product, we really wanted to capture the essence of what the client really wanted to do, and that was a Zen-ful, open, peaceful atmosphere,” McNeil said. “What we arrived at was a really simple, elegant uplifted platform that puts the plants on a pedestal.”

The chosen design direction featured a split base, with the central pillar doubling as the water fill point. A central spine in the rear ties the base to the thin lid, letting the tank and the plants take center stage.

The design was then transferred to the engineering team for functionality. Computer-aided design leader Clay Trotter worked closely with the industrial design team, using SolidWorks CAD software to detail out the base, fill port, main tank and lid. Of particular attention was ensuring that the parts could be made easily by injection molding.

The biggest design challenge was allowing water and electrical connections into the lid for the rain and LEDs while still allowing it to hinge and hold in the open position. The final design included a custom metal friction hinge with passageways carved out for the electronics and water that would not pinch any of the conduits.

While the CAD work was being finalized, the electronics team designed the circuit board. Because the device needed to have both Bluetooth and Wi-Fi capability, the team chose the ESP32 platform. This inexpensive module gave the team connectivity and plenty of inputs and outputs to control the device. The main circuit board was designed to fit perfectly in the central spine, and a daughter board was designed to hold the RGB (red, green and blue) LEDs in the lid.

Once the mechanical and electrical systems were designed, it was time to prototype.

Most of the physical parts were machined from plastic. This technique was chosen over 3D printing because large 3D prints can be prone to warping, and the main tank needed to be optically clear—which is not easy with 3D printing. The parts were then test-fit and assembled, and after a little bit of tuning were painted in gloss and matte white to simulate the texture change that will be on the molded parts. A chrome vinyl cut decal of the logo was then added to the lid to complete the assembly.

The circuit files were sent to a quick-turn PCB manufacturer, and we had boards back in Charlotte in about 10 days. The electronics were placed on the board and put in our reflow oven to solder them in place. The code for the sensors, speakers and pump were uploaded onto the board, and the team began its rigorous testing regime.

The team spent about a week working on the rain track, adjusting the diameter of the holes and the speed of the pump to get the rain to look natural. Step by step, the rest of the functionality was added to the prototype.

This culminated in the product launch on Kickstarter. The prototype was looking and working great, but we knew we needed an inspiring plant layout in the unit to really show off the great functionality. The team reached out to Linda Barnett, a terrarium artist in nearby Concord, North Carolina. She came to the Enventys Partners office and created a beautiful Zen forest, complete with a tiny pebble pathway and an Asian-inspired figurine. She even did a time-lapse build of a desert scene with succulent plants as an additional asset for the campaign.

The Kickstarter campaign, launched on February 6, raised about $20,000 in the first few days. Halfway through the campaign, the development team demonstrated the product on Kickstarter Live and took questions from the audience. It successfully funded with 328 backers and nearly $100,000, almost doubling the funding goal.

With consumer interest verified, the team has changed focus to finalizing the design files for manufacturing in anticipation of working with a factory to mass-manufacture the device.