Electric Motors: How to Choose the Right Motor When Prototyping 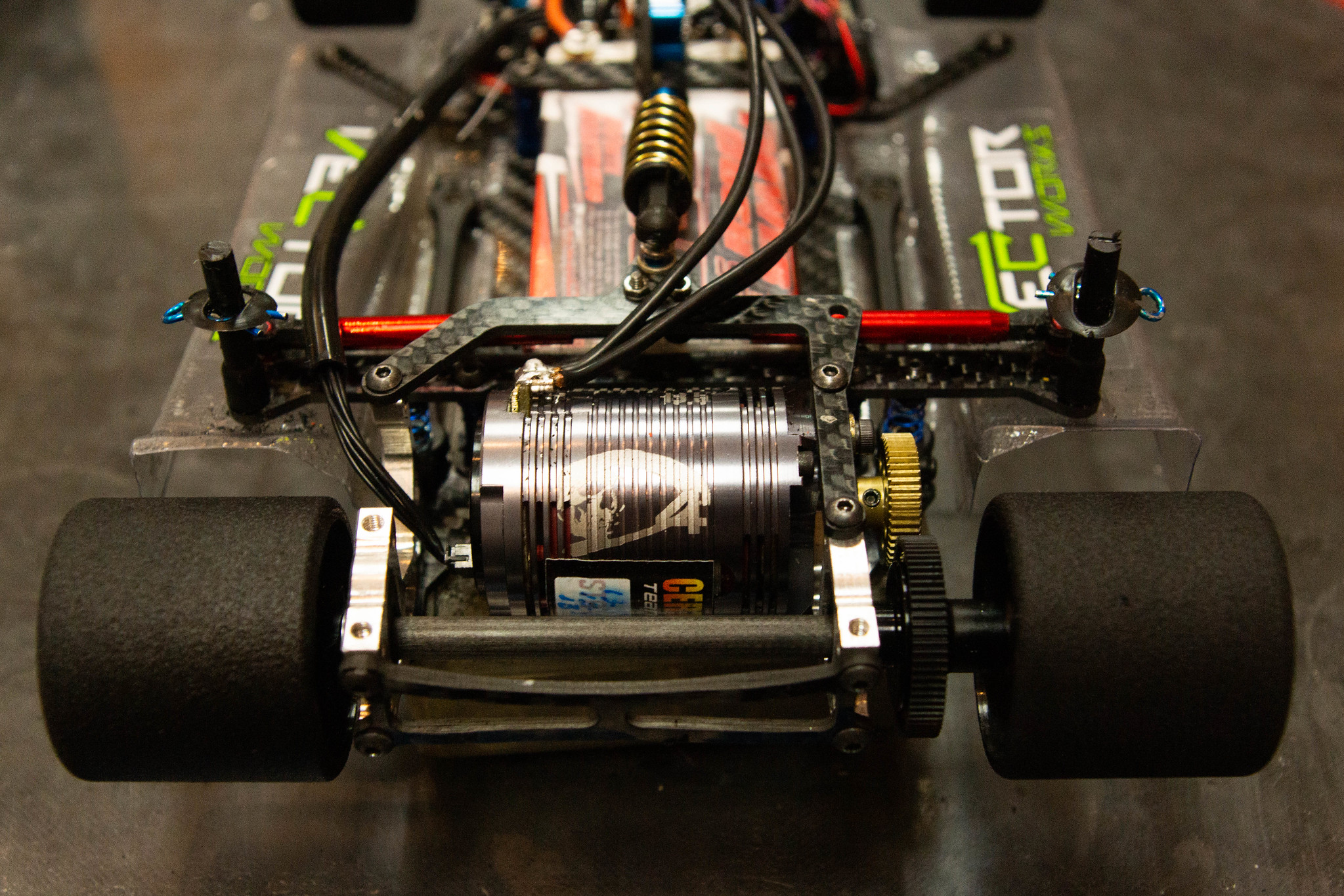 If your prototype needs to move to work, electric motors can provide clean, inexpensive, and efficient power for devices in many applications. However, choosing the right one is vital. In part 2 of this series, discover the three types of electric motors and the best time to use each when prototyping.

Prototyping with Electric Motors: How to Pick the Right One

My first experience with electric motors was as a teen when I raced radio-control cars. My dad and I would travel with our 1/10 scale cars to New York, Massachusetts, and Connecticut to race on dirt ovals, off-road courses, and tracks made from the low-pile carpet used in office buildings. Since the cars gave off no emissions, we raced them inside, which allowed for year-round fun, crucial since we lived in the cold northeast.

Even though racing radio-controlled cars seems like a whimsical pastime, the race announcers and competitors meant business. The tracks were well cared for, and the competition had electronic timing. With over 100 racers attending multi-day special events, K/N RC Speedway in Stafford Springs, Connecticut, boasted a 200ft carpet oval and huge banked corners reminiscent of the Bristol NASCAR track. The 2.5 lb cars with replica NASCAR bodies, often painted to look like the cars of Terry Labonte and Dale Earnhardt, would top 40 miles per hour. 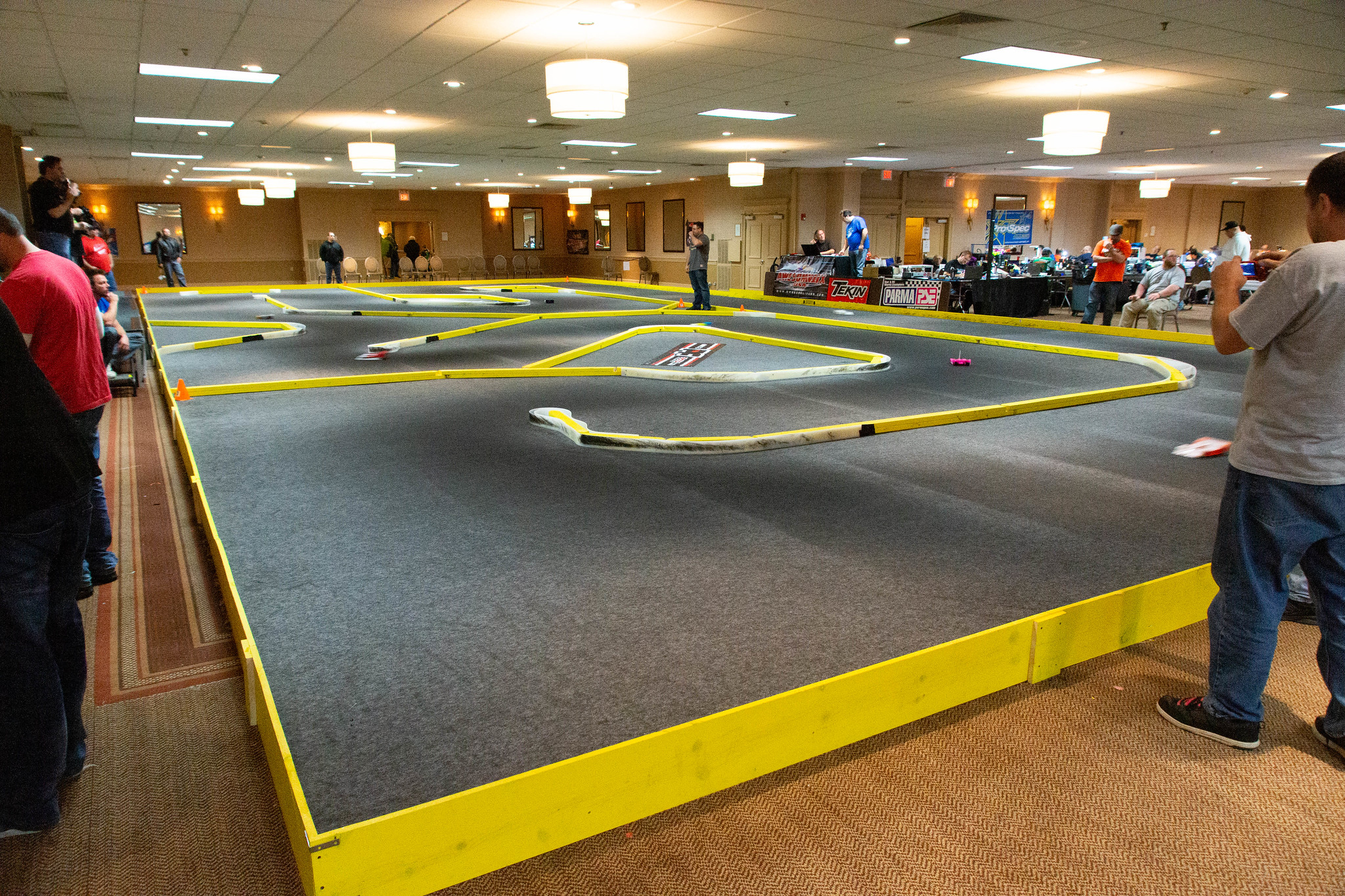 This track, erected in a hotel ballroom, held the 2014 Indoor Nationals in Cleveland. The 1/12-scale cars used powerful brushless DC motors to whip at nearly 40mph around the low-pile carpet circuit.

There are three common types of motors used in prototyping: brushed DC, servos, and steppers. Each of them has different characteristics, making them useful for a variety of prototypes. Despite their differences, they all use DC power which is easy and safe to get from batteries and wall warts or those big, boxy AC to DC converters that plug into the wall.

If you’re prototyping a consumer product that needs continuous motion, DC brushed motors is the correct type to use. These motors work well when driving a belt, a wheel, or using a gearbox. DC brushed motors will run just by applying DC voltage to their terminals, and when using different voltages in their rated range, their speed will vary.

Since they take too much power, one drawback is that you can’t control DC brushed motors directly from an Arduino or similar microcontroller without relays or a motor driver circuit. Additionally, since they provide no inherent feedback about their position or speed, prototypes with DC brushed motors need other sensors if they require precise movement. 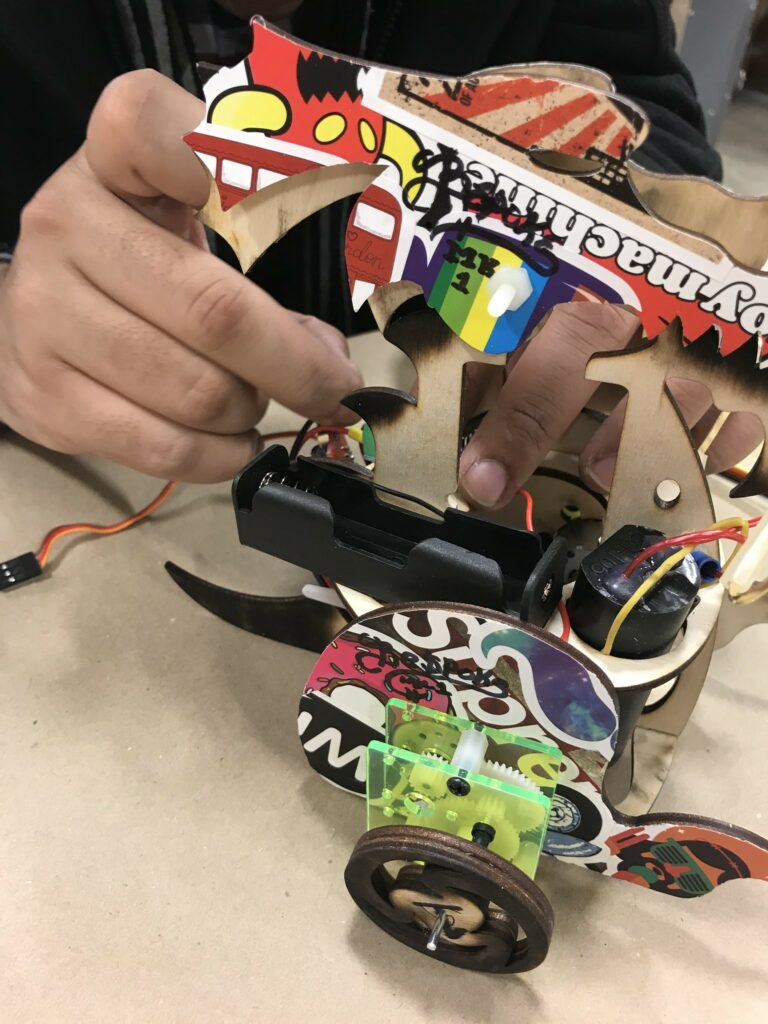 A brushed DC motor with a gearbox was used to make this fire-breathing robot dragon prototype.

If your prototype requires reciprocating, non-continuous motion, servos are your best bet. Inside a servo is a DC motor (brushed or brushless), a gearbox to increase the torque output, and a potentiometer (angle sensor). The potentiometer compares the motor controls’ angle to its actual position when commanding the prototype to move. Note that most servos have a 180-degree range of motion for a maximum of 90 degrees from the neutral position in either direction.

Servos often have an arm or wheel on the drive spline to link what’s being controlled. Servos are commonly used in RC cars to control the steering arms and are great for driving similar linkages. You will notice that if you have an RC car and try to manually steer the wheels with your hands while the car is on, the servo will sense the slight change in angle and fight against you to maintain its set point. 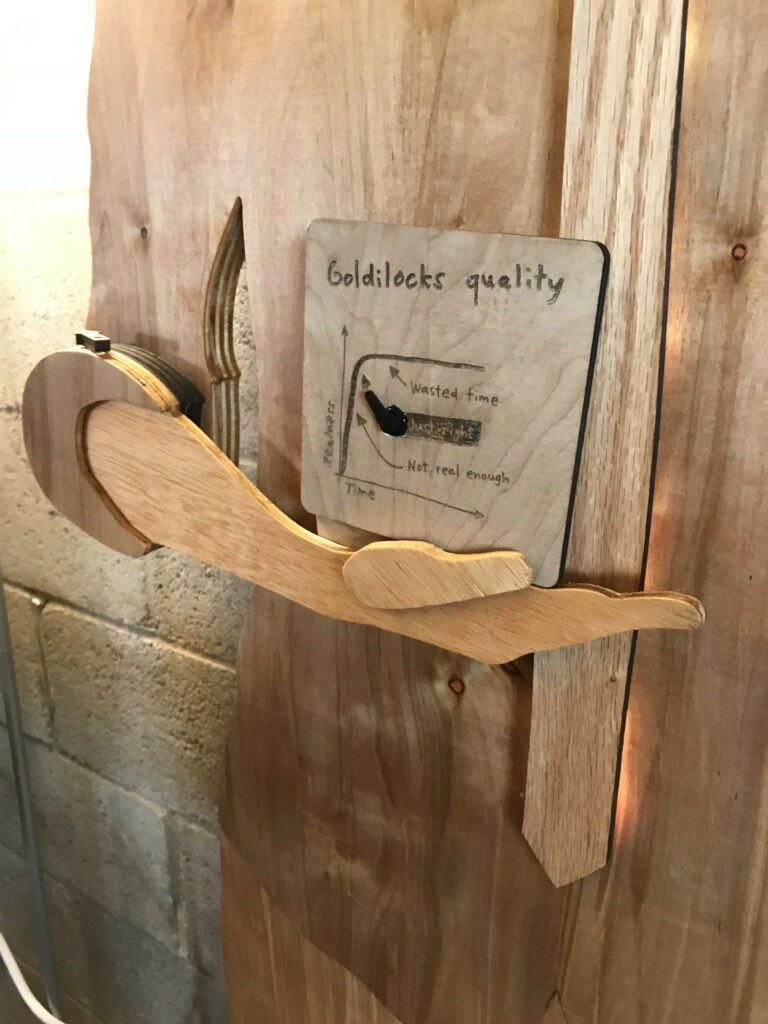 For this art piece, I used a servo motor to make this small prototype of the graph of realness vs. time.

As their name suggests, stepper motors move in incremental steps. Typically, they have 200 steps per revolution which give them an accuracy of 1.8 degrees per step. A stepper is actually a brushless motor as they have the coils in the stator (non-rotating housing of the motor). It’s also because the magnets on the rotor have small teeth that, when energized, align with corresponding teeth on the stator, allowing them to process in small steps.

With appropriate circuitry, steppers can be commanded to move with high accuracy. However, note that most steppers do not have any feedback. So, if you command a motor to move 100 steps and something gets in its way, it may only move a fraction of the journey. Steppers are often used on the axes of 3D printers to drive the print head for high-accuracy prints. 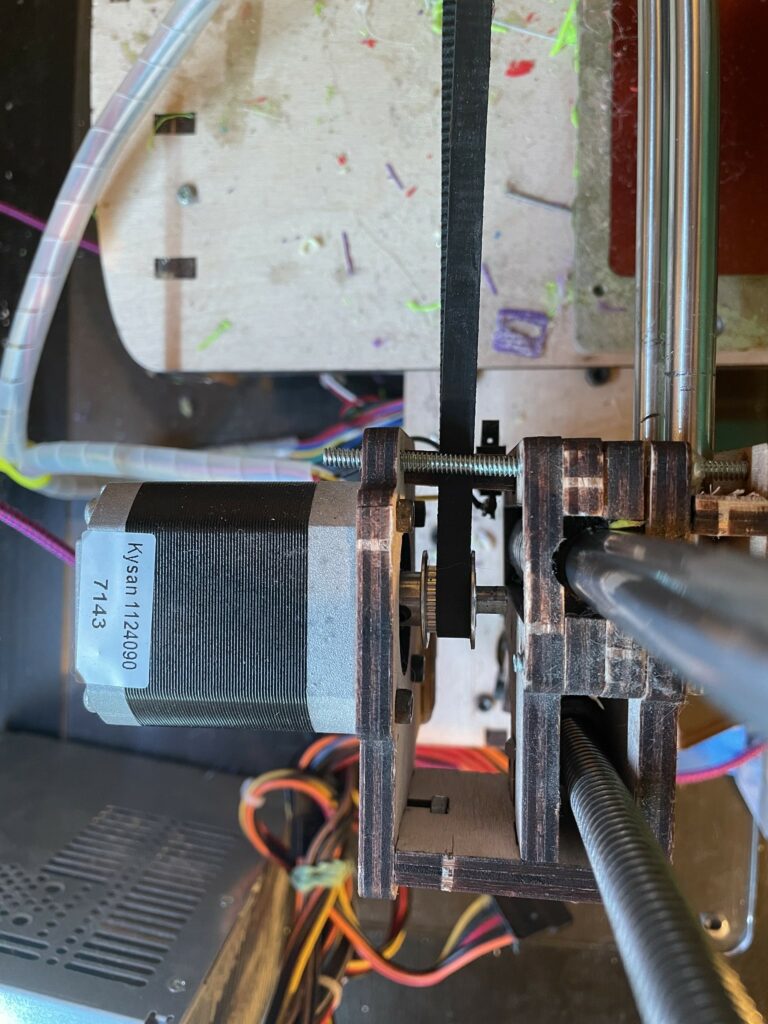 A stepper motor drives the y-axis belt of a 3D printer.

A gearbox to a motor is like whipped cream on a pumpkin pie. You don’t always need it, but they work better together. Gearboxes magnify the torque output of an electric motor at the expense of speed. For example, a gearbox with a 10:1 (said 10 to 1) ratio means that the gearbox’s output will run 1/10 the rotational speed, but with ten times the torque as it would without it. This is an excellent strategy for increasing the power output of small electric motors. 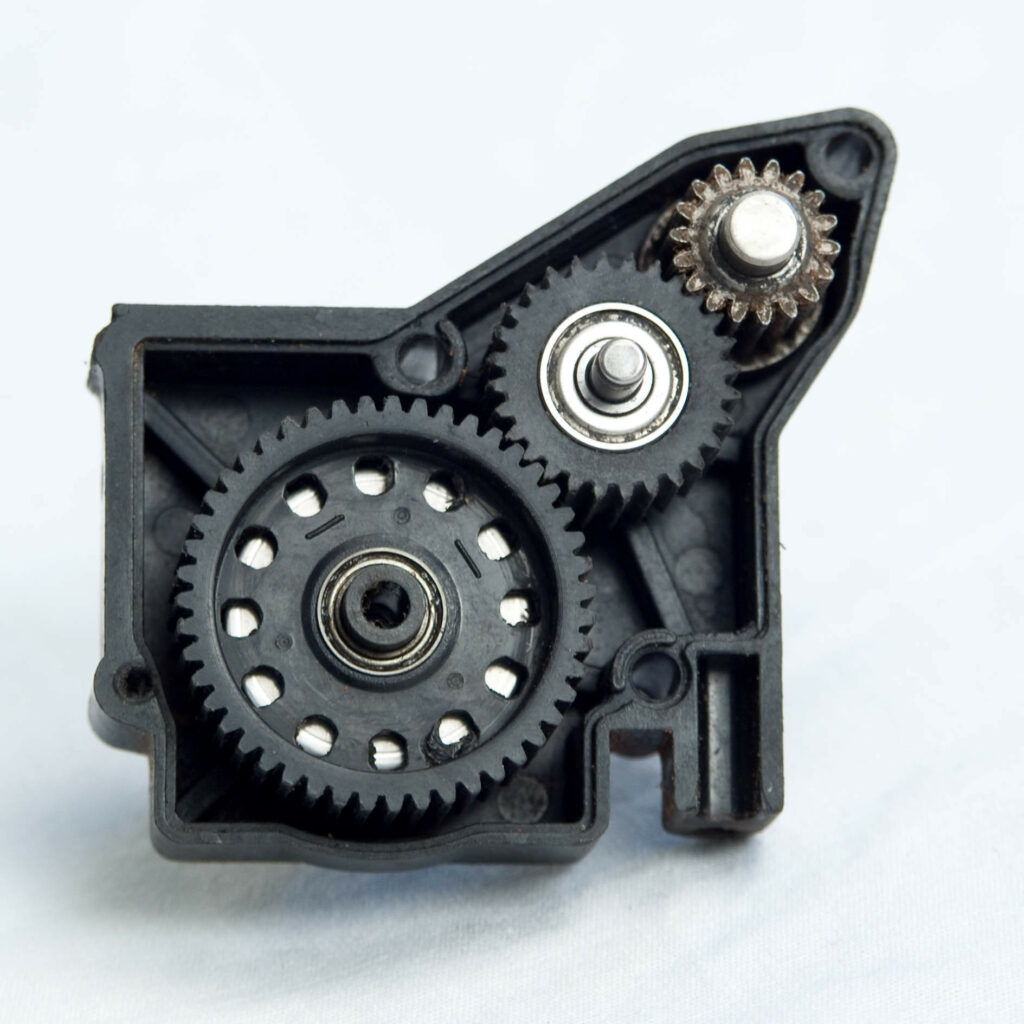 This is the inner workings of an RC car gearbox. Motor torque comes through the upper right shaft and out to the wheels from the largest gear on the bottom.

How Do Gearboxes Work

Gearboxes are commonly used with continuous rotation motors like brushed DC. (Servos already have them, and stepper motors are usually used for low torque applications.) The simplest form of a gearbox is a small gear attached to a motor’s shaft, which drives a larger gear on the shaft of whatever’s being driven. In this case, the torque increase is the number of teeth on the driven gear divided by the teeth on the motor gear.

Some gearboxes are more complicated but provide higher gear ratios and thus higher torque. Compound gearboxes, the same used inside servos, use multiple gears attached to the same hub to yield high gear ratios in a small package. Planetary gear trains use gears that rotate around each other to create high gear ratios and be stacked together to get ratios in the hundreds. If you need a gearbox, choosing an appropriate one will depend on the application, speed, and torque required for the desired work. 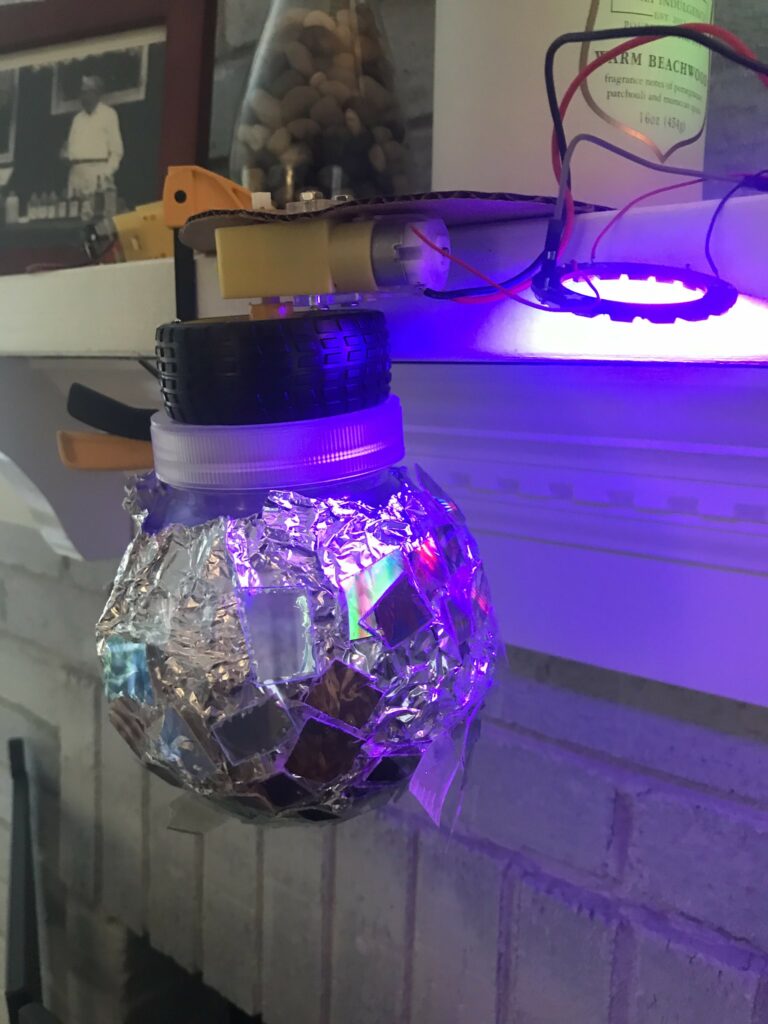 A gearbox (yellow) drives this disco ball prototype at a slow speed.

How to Choose a Motor for Your Prototype

With so many choices, it can be a challenge when choosing a motor for your prototype.

Step 1: What Type of Motion?

The first step is to figure out the type of motion you are needing. If you need continuous rotation, a DC brushed motor is probably the best. Suppose you need precision motion of a linkage or reciprocal motion. In that case, a servo is the right choice. Steppers are used when you need precision control of something that requires multiple rotations and relatively little torque.

Step 2: Figure Out the Size

The size of the motor can be a daunting task to figure out. Fortunately, most motors available through electronics suppliers will have associated data sheets that show the torque output and the speed of each motor. You can calculate if the specs will suit your application based on the load and speed of what you need to move.

Note that electric motors usually make the most amount of torque at zero speed, so you need to make sure that your motor has enough torque to drive what you need at the motor speed you require. A good datasheet will show a curve of torque vs. speed to help. A gut check compares the size of the motor you are thinking of using with similar commercially available products. If you are prototyping an immersion blender, the one you use will probably be roughly the same size as a blender you can find in the store.

Step 3: What’s Connected to the Motor?

Fortunately, you can control all three types of motors with Arduinos or other small microcontrollers. DC brushed motors draw too much current to be plugged directly into the output pins, but an array of relays or a small motor driver circuit makes it easy. Servo motors have lower amp draw and can be used without additional circuitry as long as the load on the servo is not too powerful. Several motor drivers can handle both DC brushed and stepper motors, which provides good value for the prototyper. Steppers require a motor driver board between the motor and the controller. There are also good software libraries and example codes to drive stepper motors to make them easy to get them up and running. 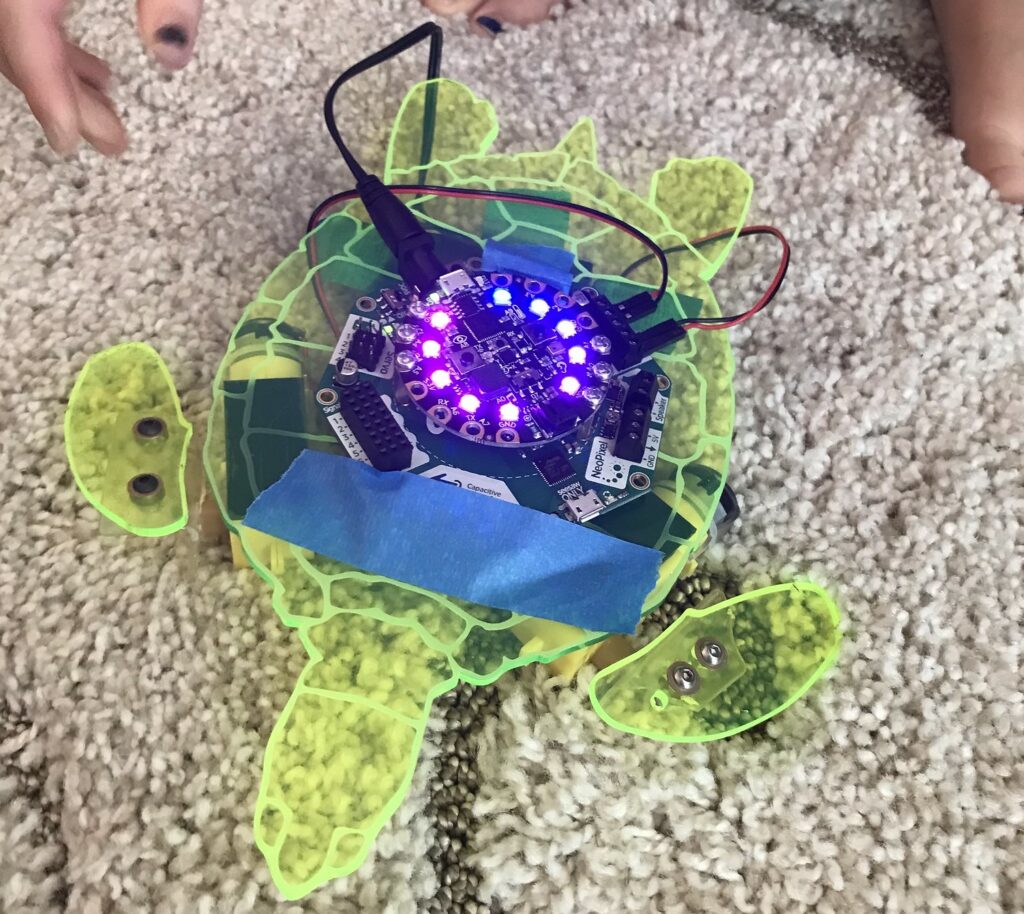 This robot turtle prototype uses the Adafruit Circuit Playground microcontroller attached to a Cricket board that includes motor driver circuitry to drive the motors that control the fins.

Electric motors are ubiquitous, from tiny medical devices and kitchen appliances to electric cars now taking over the roadways from their gas-guzzling predecessors. With technology nearly 200 years in the making, they provide clean, inexpensive, and efficient power for devices in many applications. Whether you use continuous motors, servos, or steppers in your next prototype, they are all easy for the at-home prototyper to use for their next innovation.

And reach out to Enventys Partners if you need assistance with the electronic motor in your prototype!