Cellular Technology: The History and Its Future in Prototyping 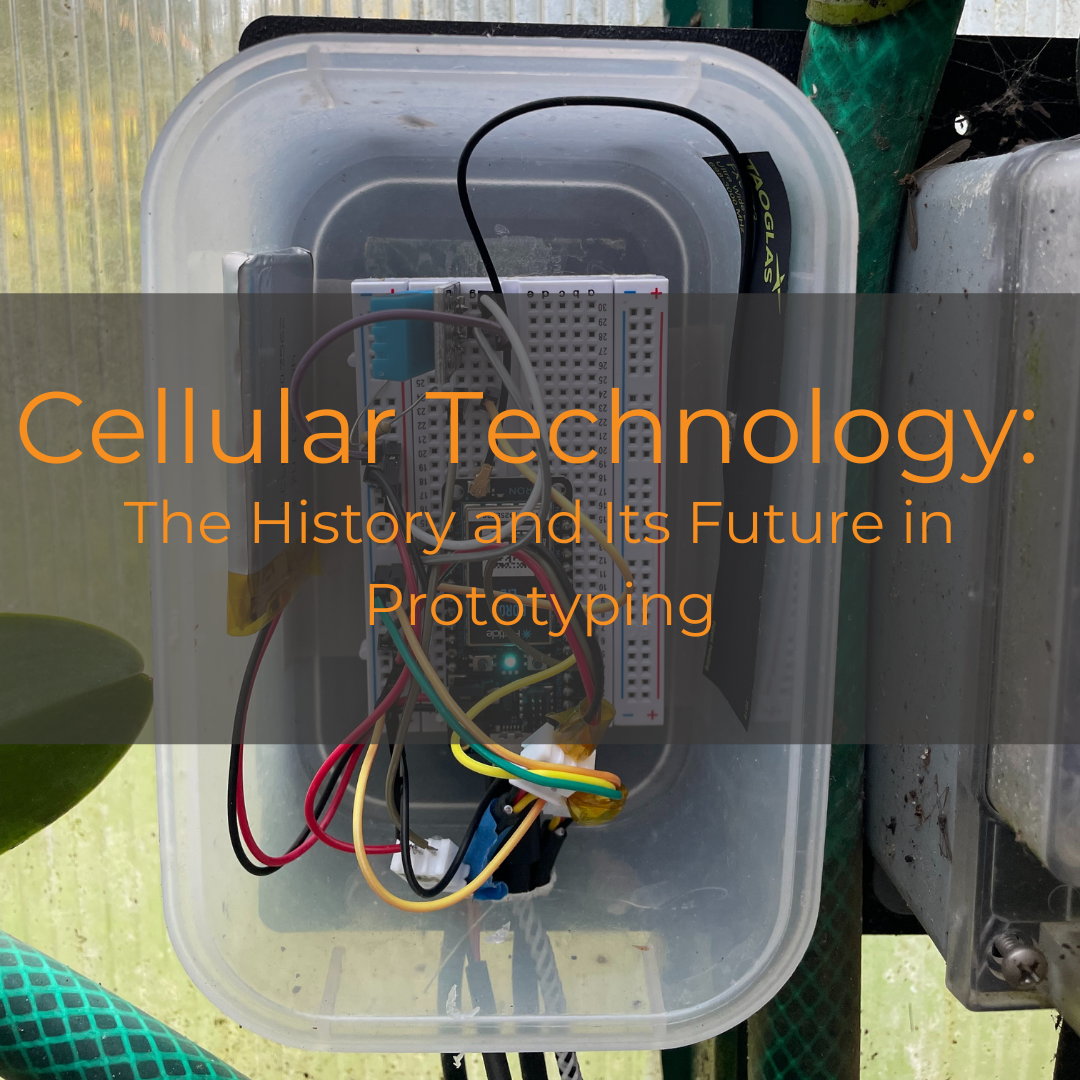 The Internet of Things is driven by connectivity. For IoT devices to work, they have to get to the internet somehow so they can send and receive data. In the early days of IoT, this meant plugging the device into an ethernet port so WiFi and Bluetooth became de rigueur over cellular.

Regardless, cellular networks provide a tried and true way for connected devices to link up with the wider world. The technology has advanced to the point where it is easy and economical to include cellular technology into prototypes and end-use products. In this article, learn about the history of cellular technology and its pathways for prototyping.

What is Cellular Technology?

Similar to WiFi and Bluetooth

Like WiFi and Bluetooth, Cellular is a protocol that allows data to be transmitted wirelessly. Cellular provides long-distance, high bandwidth data transmission, but at the expense of high power consumption. For example, smartphones use cellular technology for voice, text, and data, but you will notice in practice that the battery dies quickly if streaming data over cellular.

Despite its high-power usage, cellular has many advantages. Instead of having to be in close proximity to a router that requires fixed credentials to connect, cellular devices use SIM (Subscriber Identity Module) cards which allow the cell tower to identify the connected device as well as track and bill its usage accordingly. As long as you have a valid SIM card, you can connect to compatible cell towers within 20-40 miles while streaming data even if the device is in motion.

While cellular technology and cell phones seem fairly new, its roots go back decades. Those of a certain age will remember Zack Morris using a Motorola DynaTAC in some episodes of Saved by the Bell in the late 80s.

However, the first cellular phone call was actually made on April 3, 1973, when a Motorola Engineer, Martin Cooper, made a call to Joel Engel, the head at AT&T while walking down the street in New York City. It was a troll of epic proportions but also the beginning of a technological journey that has changed the way people and machines communicate.

Standalone cellular IoT devices took a bit longer to evolve. Decades were spent working on Machine to Machine communication in which industrial machines would report their states to a central control panel or database. This was done exclusively through wired connections until 1995 when Siemens adapted a version of their cellular phone circuitry to allow remote machines and vehicles to communicate wirelessly via the cellular network. Even still, it took another couple of decades for the technology to mature enough to make it into the hands of desktop developers.

In 2015, Particle Technologies launched a Kickstarter campaign for their cellular-based development kit called the Electron, which gave developers a cellular IoT module with 2G or 3G power for just $40. This was the forerunner to the tapestry of options that exists today for prototypers.

The release of the smartphone in the 2000s provided another way for devices to communicate cellularly without having a cellular chip on the device itself. This is because smartphones merged multiple wireless technologies into a single device. IoT devices could then use low-cost Bluetooth circuitry to transmit short-range data to the phone while allowing the phone to push the data to a database via WiFi or cellular networks if WiFi is not available. 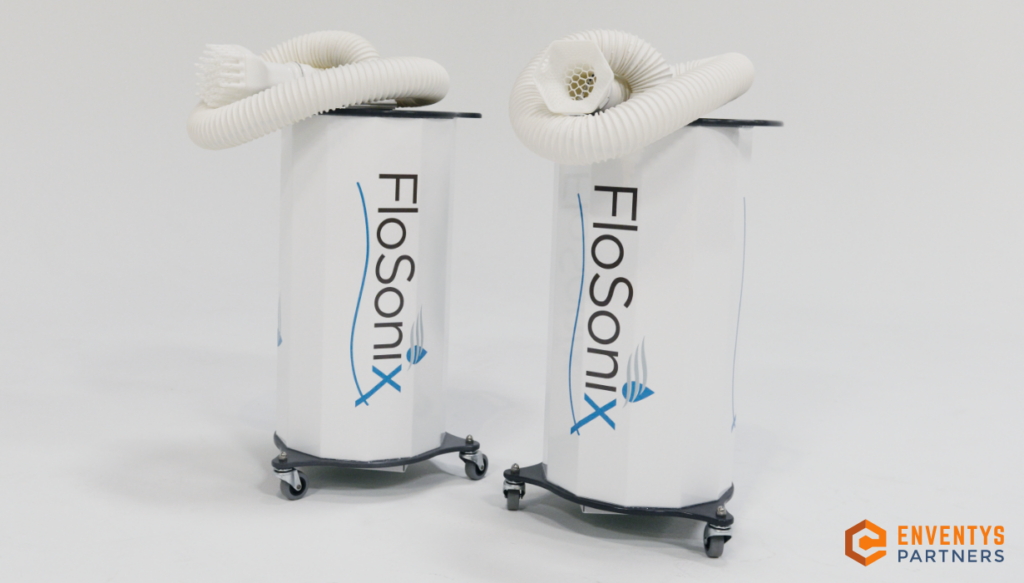 The Flosonix lice desiccation machine, which was developed at Enventys Partners, has two versions, one with WiFi and the other with cellular technology to make it easier to track and record device that moves through different clinics or for remote treatments.

In cell phone commercials, you hear shorthand names for networks like 3G, 4G, 5G, and LTE, but they never really explain what these terms mean. The G designator in the name just stands for the generation of the technology and each successive generation has brought an increase in features and data speed.

The first generation, 1G was voice only. When 2G was introduced in 1991, it added support for text messaging. 3G increased the data speed from 64kbs to 2MBs, and 4G offered the potential to increase speeds to 100x that of 3G.

LTE stands for “Long Term Evolution” and is not really a separate generation more than a name for a sub technology used so that 4G can achieve the speeds it touted. The latest generation, 5G, will allow for greater bandwidth for streaming video and speeds as high as 10 Gbps but is not yet available in all areas.

IoT devices can use these same networks, but there are also two bespoke sub-networks, LTE-M and NB-IoT, which are inside these cellular generations and are specifically designed for IoT applications. These were designed starting with the 4G specification to allow IoT devices to operate with less power and better coverage, especially indoors.

The NB in NB-IoT stands for narrowband, which keeps power consumption lower, which is perfect for IoT devices that mostly need to just transfer or receive relatively small amounts of data and not stream video. Fortunately, all of this is baked into developer IoT devices and are features that do not require a decision point or consideration for prototyping.

Fortunately, there are many great options available to build a cellular-based prototype, and most are well under $100. One should note that while the device itself has a cost, there are often recurring monthly costs to support the use of cellular devices that you need to be aware of before getting started. Pushing too much data will incur fees, just like using too much data on a cell phone plan. To prevent incurring additional costs, be careful with the code you write.

There are two main ways to prototype with cellular. You can start with a device that already has cellular on the board or you can add a “hat” to an existing device like an Arduino. If you are starting fresh, it is best to choose a microcontroller that has cellular built in. My two favorites for this are the Particle Boron and the Arduino MKR GSM 1400.

The Particle Boron is a generational step forward from the Particle Electron that was mentioned earlier. It was designed to use the Adafruit Feather footprint, allowing it to easily interface with Feather-based sensors and actuators. It can be programmed wirelessly using Particle’s web-based programming platform and works with many Arduino libraries and code samples. Particle also offers free data for 100K data operations per month and support for up to 100 devices, which is compelling for prototypers.

The Arduino MKR GSM 1400 is also a great option in the same category. It offers the familiarity with the Arduino platform that is so comfortable to many prototypers but with the power of cellular. It integrates with Arduinos cloud platform, Arduino Cloud IoT so you can visualize data quickly and easily. You get 10MB free data for up to 90 days, but then it costs $1.50 per month for 5MB of data thereafter. 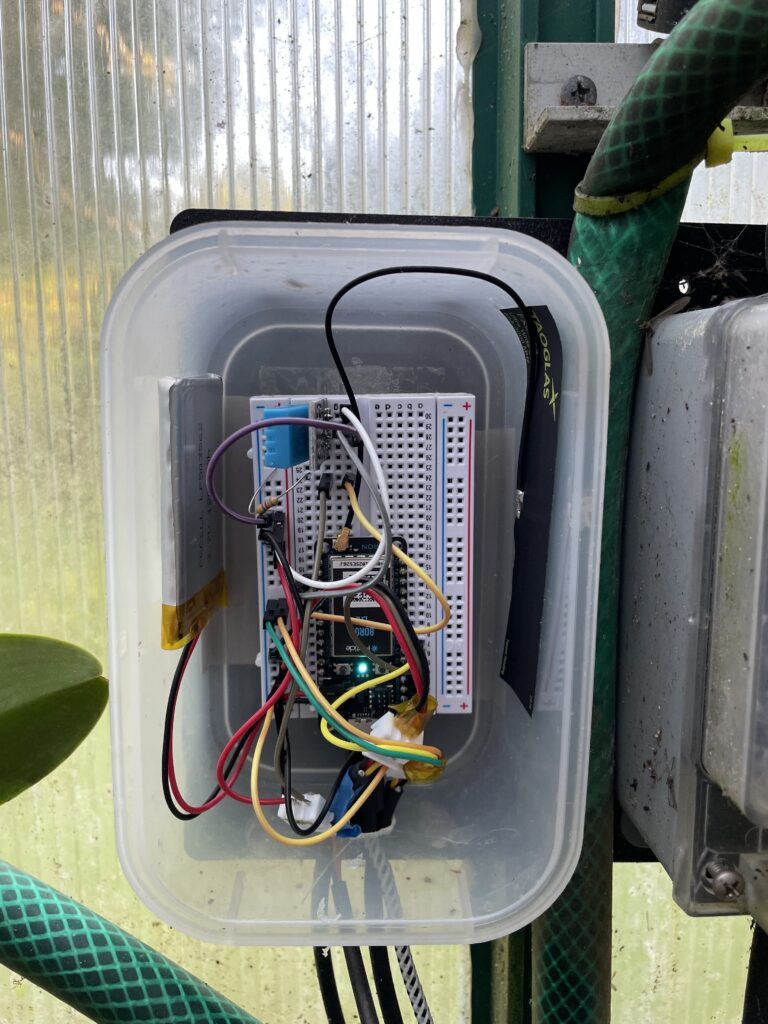 I upgraded the monitoring of my greenhouse conditions with a Boron cellular device. I can keep track of temperature, humidity, light levels, and pressure in my cooling system without having to worry about WiFi outages.

If you already have code working on a development device and just want to attach cell connectivity, you can use add-on modules, called hats or shields. Both Adafruit and Sparkfun have cellular shields for Arduinos that plug directly on top of an Arduino form factor with easy-to-use libraries to get you up and running.

The Adafruit FONA has 3G power, and the SparkFun LTE CAT M1/NB-IoT Shield takes advantage of the lower power draw of NB-IoT. Blues.io is a relatively new player in the cellular field, but has a robust offering of cellular hats for different formats. Their Notebook line includes boards that are compatible with Arduino, Raspberry Pi, and Feather footprints and can support LiPo or alkaline batteries as well as solar power input.

The Power of Untethered Wireless Connectivity

No matter which pathway to decide, it should be relatively easy to add cellular connectivity to your electronic prototype so you can leverage the power of untethered and reliable wireless connectivity.

Enventys Partners has accumulated extensive knowledge and hands-on experience using cellular technology. If you have a great IoT idea, reach out to learn how our product development team can help integrate cell power.