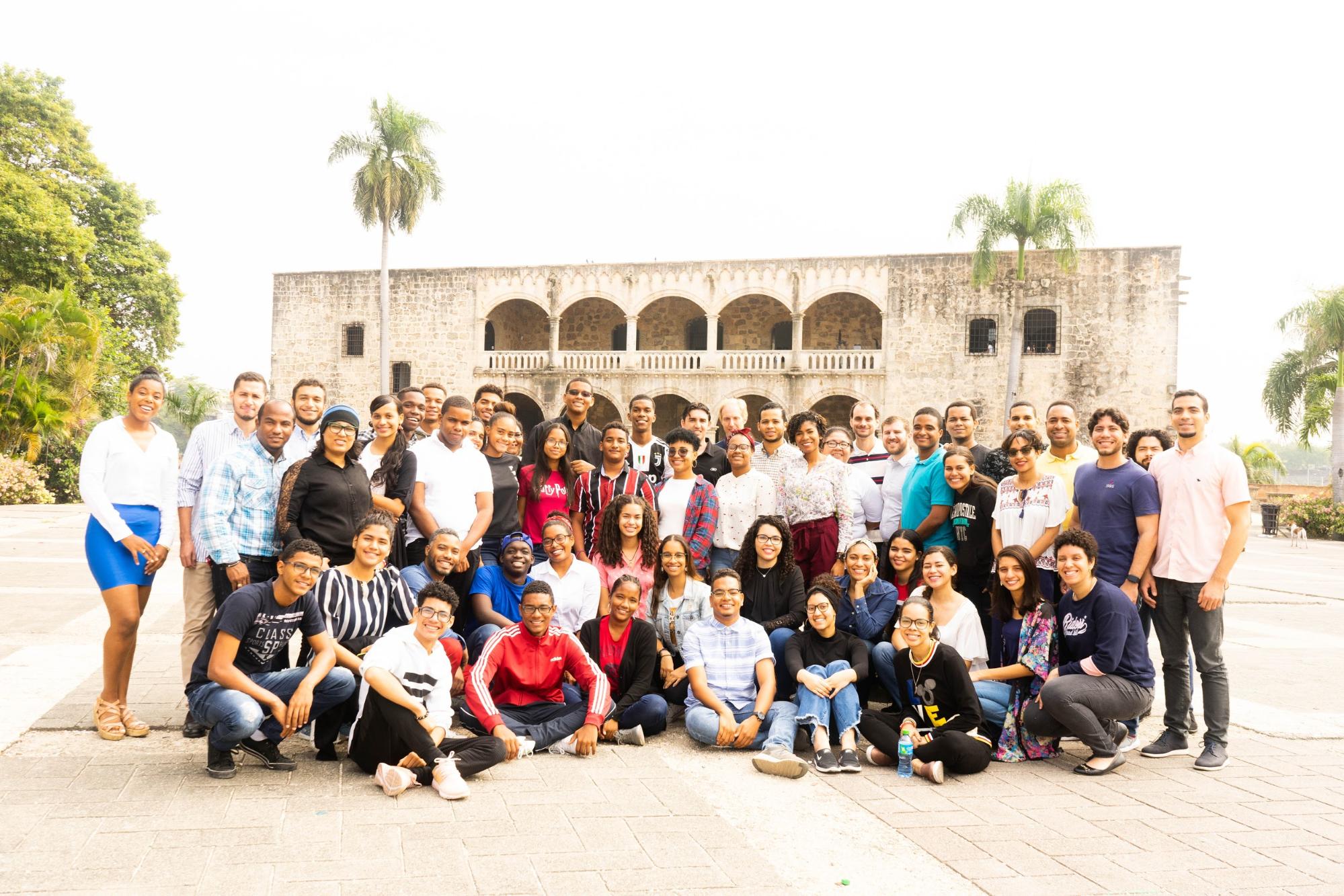 Motor vehicle accidents are the cause of approximately 38,000 deaths per year in the United States in addition to countless injuries and property damage. As bad as it is in the States, it is an even bigger problem in the Dominican Republic.

A 2015 WHO report on road safety stated that the DR had a fatality rate of 29.3 deaths per 100,000 residents, ranking them #1 in the Americas and 15th in the world. This rate is nearly double that of the US.

Inspiring Innovation in the Dominican Republic

Last year, I was awarded a grant from the US Embassy in the Dominican Republic to do an Innovation Training Bootcamp in Santo Domingo. I had done a similar program there in 2018 where we tasked the students to make it easier to grow plants at home. It was a fun challenge and, as a plant lover, close to my heart. However, when given the opportunity to go back again, I wanted to take on a more impactful problem. Given the issues of road safety on the island, it was an obvious choice to make this the new mission.

The Innovation Bootcamp was held in Santo Domingo on February 18 through 21 at the Centro Cultural de las Telecomunicaciones (Telecommunications Museum and Cultural Center). It was the perfect venue since it was conveniently located in the heart of the Colonial Zone, a popular tourist area of the city. I was joined by Eric Gorman and Julia Jackson of Wily Design in Charlotte, and Emil Rodriguez, CEO of Xolutronic, an electronics design firm in Santo Domingo. Together, we led fifty pupils through the activities of the four-day event. The participants included university students, industry professionals from companies like Eaton, and a group of high school seniors from Instituto Técnico Salesiano, a tech high school in the area. 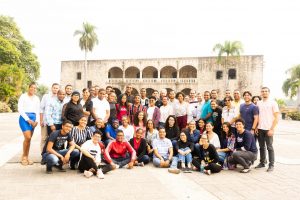 The boot camp participants and facilitators in the Alcazar Plaza.

Innovation Training Bootcamp is meant to provide hands-on workshops with three goals in mind: to learn the fundamentals of innovation through design sprint methodology, to learn practical applications of IoT, and to have the students build awesome prototypes for user feedback.

This year, we gave the students the prompt, “How might we reduce car accidents caused by drunk or sleepy drivers?” to address the issue of motor vehicle fatalities. By the end of the week, each of the ten teams of students developed an interesting solution to the problem and built great first prototypes.

The backbone of our innovation training program is the concept of design sprint methodology. Design sprints are a technique to quickly innovate around a challenge question where you develop a solution and build a prototype to solicit feedback in just one week. Many times, it can take years and a huge budget to develop a product or service. Because of this, it’s important to know if what is being developed will resonate with consumers or end users. That’s why design sprints are a great push to build a prototype with a “Goldilocks Quality” in that it’s “just right.” This means that it should have just enough fidelity to seem real, but without the time spent refining every detail. The “Goldilocks” prototype is then used to solicit feedback to see which features are working and which are not, so you’re not designing in a bubble. 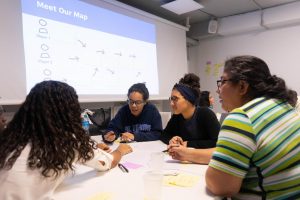 Students map out the challenge.

Eric and Julia led the start of the boot camp and introduced the challenge question. They helped the participants define and map the challenge to deepen their understanding of the problem and identify opportunities. The students were encouraged to view the problem from 2 years in the future in order to see what success would look like. They were also asked to consider things that might cause them to fail, and reframe them into opportunity statements to guide their development of solutions.

Participants learned how to sketch potential solutions through a series of idea generation activities which included developing early concepts, rapidly exploring variations, and, ultimately, developing more detailed sketches. Once teams voted and selected concepts, they were guided through story flow and storyboard activities that helped each team illustrate their solutions in more detail. These would later be used to guide the development of their prototypes. 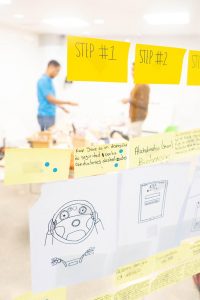 The concepts were interesting and varied with the prototypes coming to life rapidly over the next two days. A few teams created devices that would recognize a driver falling asleep and use LEDs or vibration in the steering wheel to keep them focused. One team used an alcohol sensor that would keep the car from starting unless the driver is sober, and another team added a device to a seatbelt that provided an alert for a sleepy driver.

In the spirit of the design sprint, the teams used materials and techniques that were easy to manipulate. The physical parts were made from foam and cardboard or 3D printed parts with one student even bringing in a sewing machine. To help with the electronic aspects of their prototypes, we provided a kit of sensors and actuators. Additionally, IoT hardware company, Particle, donated 50 of their Photon WiFi development boards to the program. The result was a great set of prototypes that had enough fidelity to show to potential users. 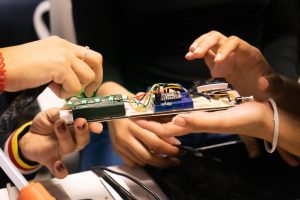 Two students work on an electronic prototype powered by the Particle Photon.

On day three of the program, the teams stopped building and set out to get feedback on their devices. Eric and Julia helped them compose an interview script and gave them pointers on how to procure meaningful feedback so they could effectively complete five interviews. Fortunately, the venue was very close to a busy tourist area, so students were able to show their concepts to people from all over the world without having to walk more than a few steps from the venue’s front door.

On the final day, the teams used this feedback to refine their prototypes and I presented information about crowdfunding and how best to run a campaign. To finish the boot camp, each team developed a three-minute presentation to show the rest of the class, as well as representatives from the U.S. Embassy, how their device worked and how it addressed the problem of reducing accidents from drunk or sleepy drivers. 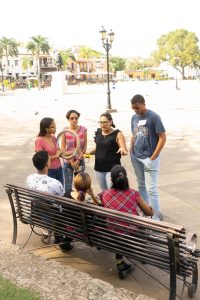 Students took to the Alcazar Plaza with their prototypes to solicit feedback from the public.

Overall, the Innovation Training Bootcamp was a great way to share in-depth product development knowledge with a group of promising students. During this trip, I was blown away by the talented and driven Dominican participants and their amazing prototypes. From my conversations with the students, I learned about the Dominican culture and the challenges they currently face, both in general—there was an issue with their national elections while during my time there which prompted protests around the city and country—and with innovating on the island. Based on the boot camp’s success, my teammates and I are looking forward to bringing more training to the Dominican Republic and continuing our support to help grow the innovation culture in Santo Domingo and beyond.