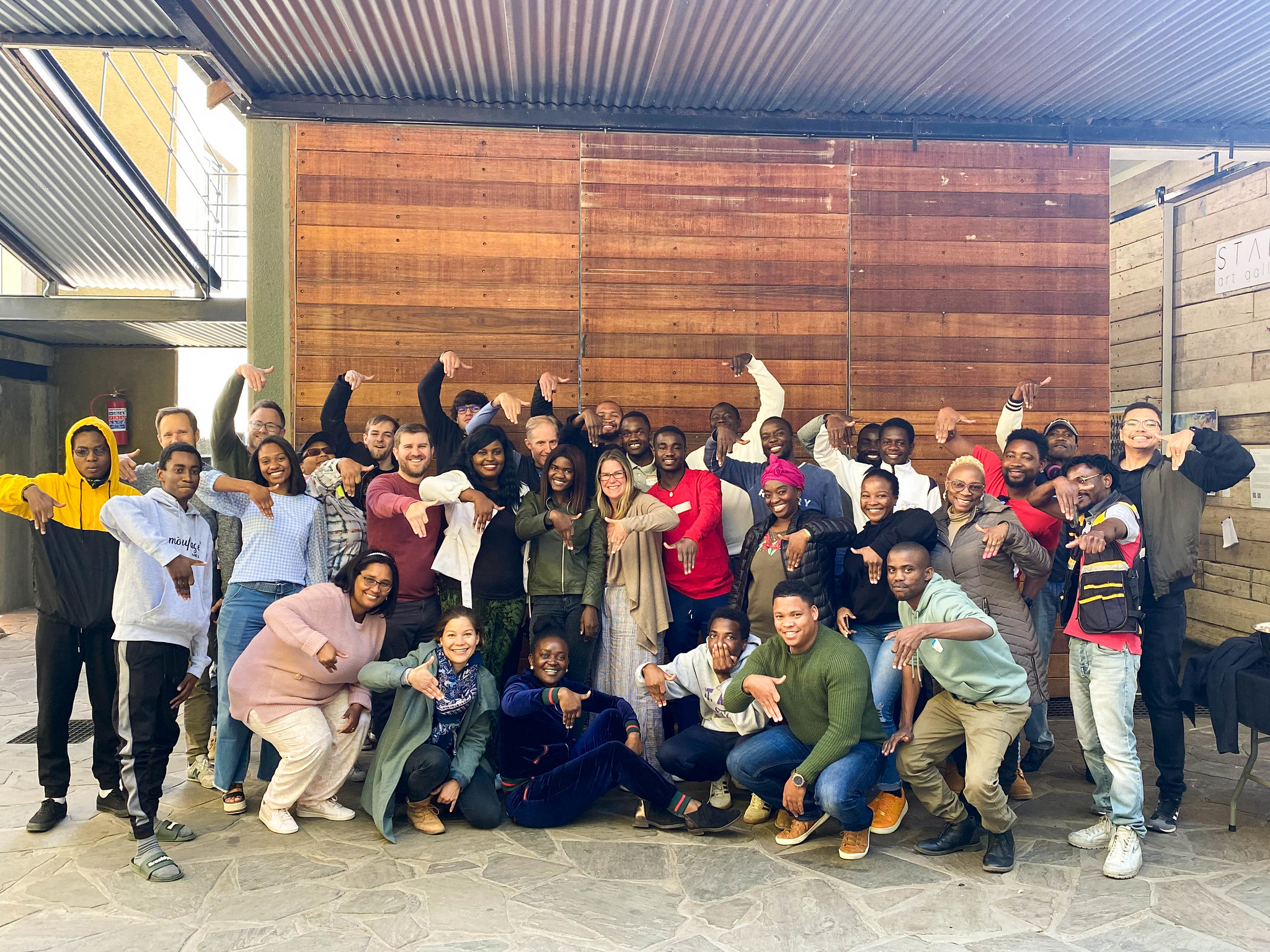 An innovation training bootcamp in Namibia revealed unforgettable scenery and people. After two days of training, participants rose to the challenge of building a prototype to demonstrate their solution to the following question: How might we leverage technology to monitor, protect and conserve Namibia’s wildlife and natural wonders?

There is a picture that has popped up on my Windows background for years, and I never knew where it was.

You know the one.

It is a desert landscape with huge sand dunes that reach up to an electric blue sky, with striking dead trees planted in the middle of a vast salt pan. It is a surreal portrait of what was once a thriving ecosystem from a former floodplain that dried up hundreds of years ago. 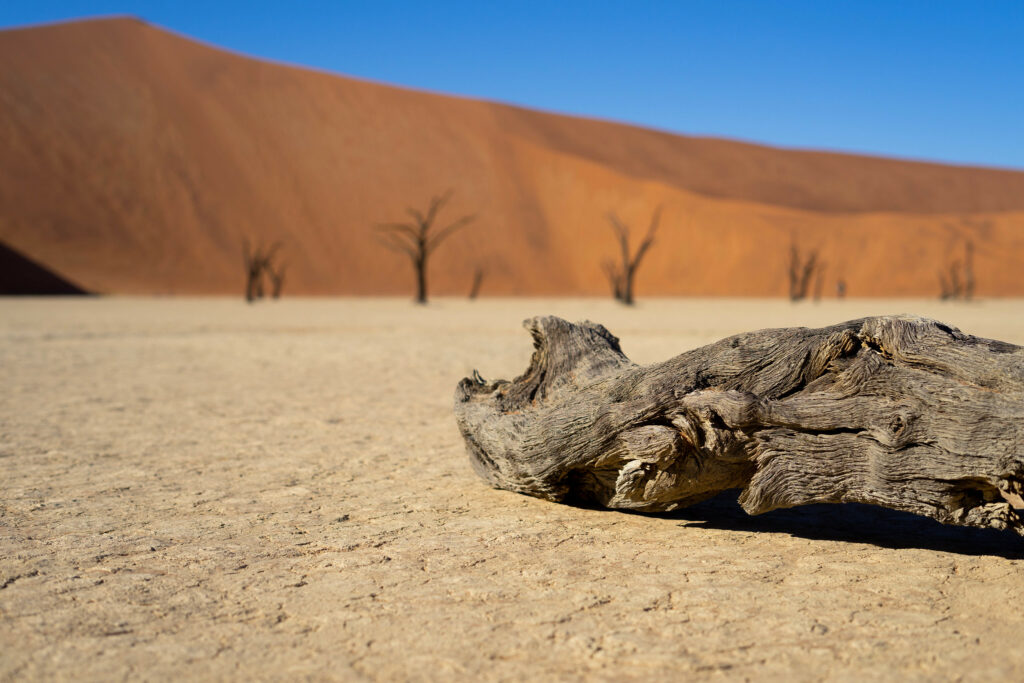 Many of us have seen a version of this on our desktop backgrounds.

This beautiful and eerie landscape is called the Deadvlei—one small part of a desert wonderland of the beautiful and sparsely populated Southern African country of Namibia. So, when I won a U.S. State Department grant to oversee an innovation training there, I was as excited to see my Windows background in real life. I was equally intrigued to meet and work with the people who call this place home.

The program in Namibia was similar to some of the other international training programs I have done. It was a 4-day innovation training bootcamp rooted in design sprint methodology and fast prototyping techniques. The training was set in the capital city of Windhoek, a 5-hour drive from the famed Deadvlei. It was hosted at The Village—an oasis of restaurants, urban greenery and co-working space on the north side of town.

I was joined again by Eric Gorman and Julia Jackson from Wily Design in Charlotte. We teamed with Namibia-based Dololo. Run by Tim Wucher and Chantal Claassen, Dololo is an organization that provides training and support for the business and entrepreneurial community and whose values are perfectly aligned with the spirit of the program. Dololo’s help and support were crucial for the success of the event.

Being in a country filled with natural beauty and unique plant and animal species, it was natural for our theme to be wildlife. The sad reality is that because Namibia has great wildlife such as lions, rhinos and elephants and unique plant life such as rare succulents and adeniums (desert roses), it is a target for poachers who illegally take these species from the wild and sell them on the black market.

So our challenge and theme for the program were: How might we leverage technology to monitor, protect and conserve Namibia’s wildlife and natural wonders? 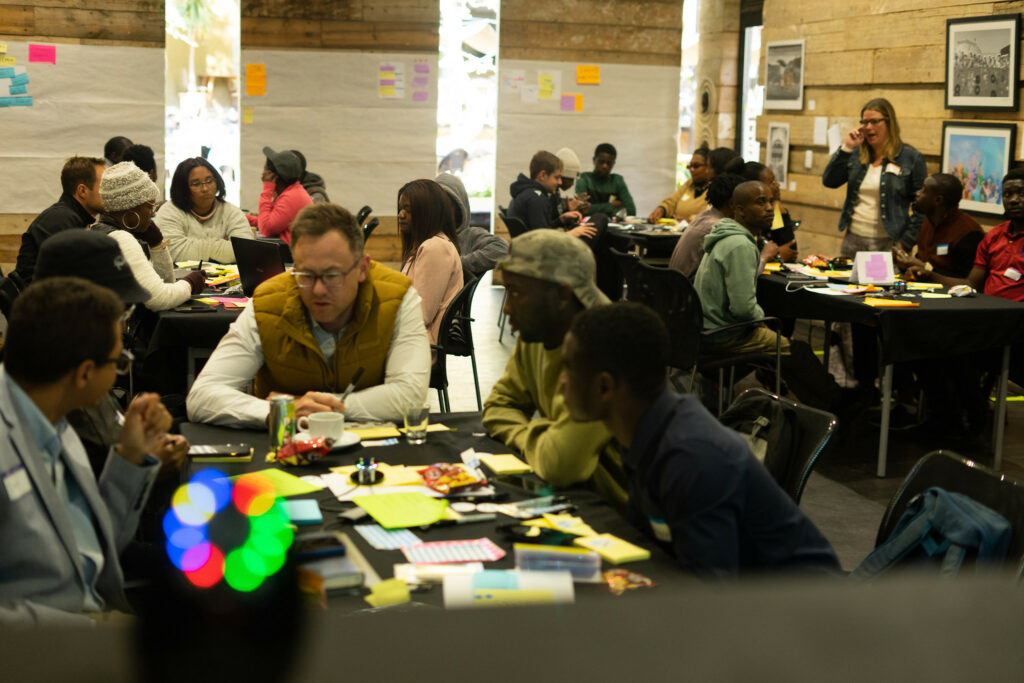 Teams work on the challenge question during the training session.

The bootcamp received applications from 250 people. For the lucky 32 chosen, we started by framing the problem. We did this by soliciting knowledge from experts in the field.

Professor Andrew Zulu from Namibia University of Science and Technology gave a short presentation on the problem of animal poaching and how drone technology is being used to help curb it. We also solicited insights from Leevi Nanyeni from the National Botanic Research Institute. Nanyeni spoke about the plant species that are drawing unwanted attention and whose numbers are being decimated by poaching. 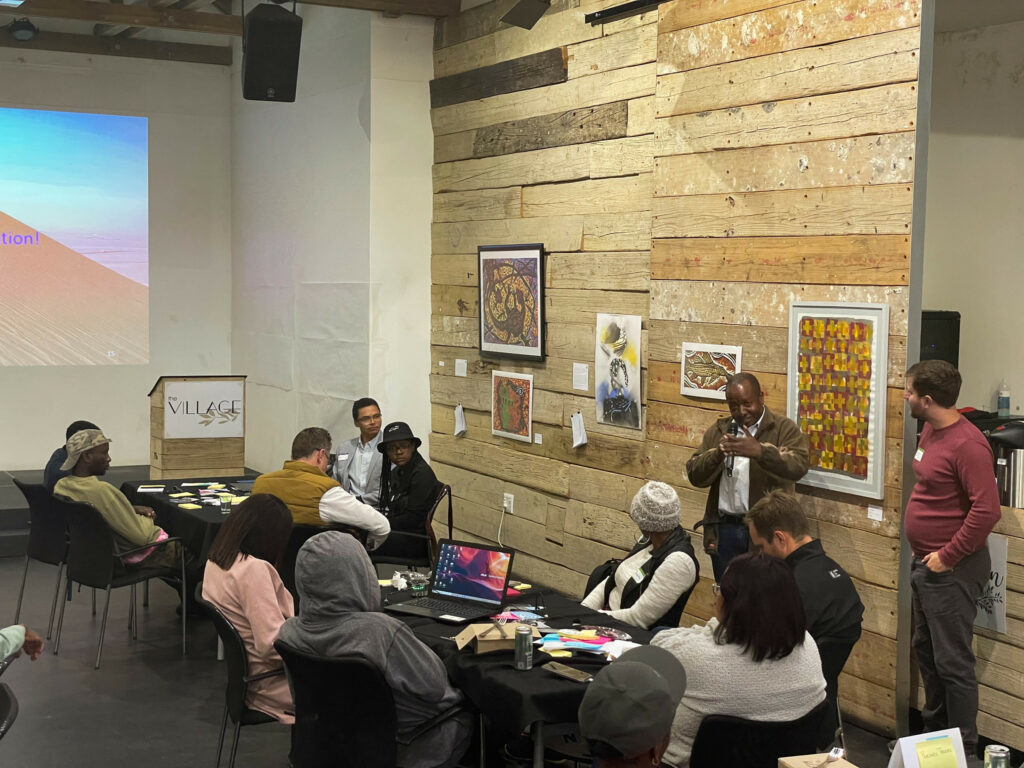 Professor Andrew Zulu dropped by to discuss poaching in Namibia and how drones are used in the fight.

A primary objective of the training was to teach some rapid prototyping techniques, so I brought a suite of electronics to help.

I led a short lab session on how to rapidly create code on the Adafruit Circuit Playground Express. IoT company Particle was again a great sponsor of the program, providing Argon WiFi boards that I used to show the students how to rapidly build IoT devices.

Julia and Eric then took center stage to lead the design sprint part of the program. They did a series of high-energy, hands-on activities to help the teams consider different aspects of the challenge and to purposefully decide what to build before beginning to prototype anything. 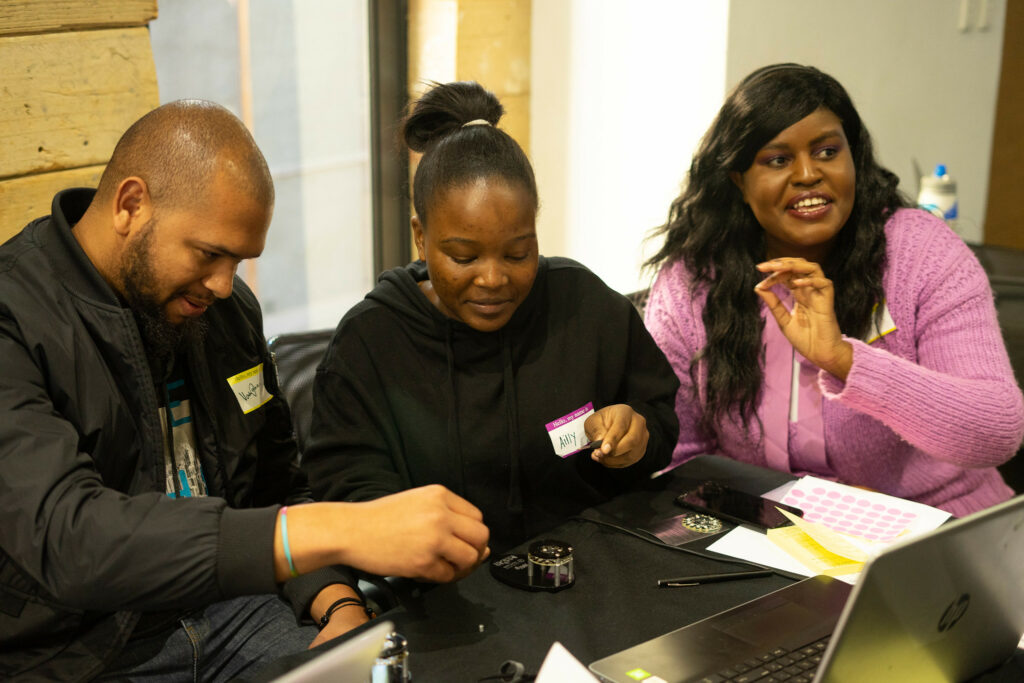 Teams used the Adafruit Circuit Playground to learn rapid coding techniques, then used them later in the bootcamp for prototyping.

After two days of training, it was time for participants to rise to the challenge and build a prototype to demonstrate their solution to the problem. I was not disappointed.

All six teams built wonderfully executed physical and digital prototypes. Because there was a scandal in recent years involving the fishing industry, two teams focused on solutions related to sustainability in fish harvesting. Other teams concentrated on systems to monitor big game with IoT and satellite technology. Another team’s theme was sustainable farming and timber harvesting. 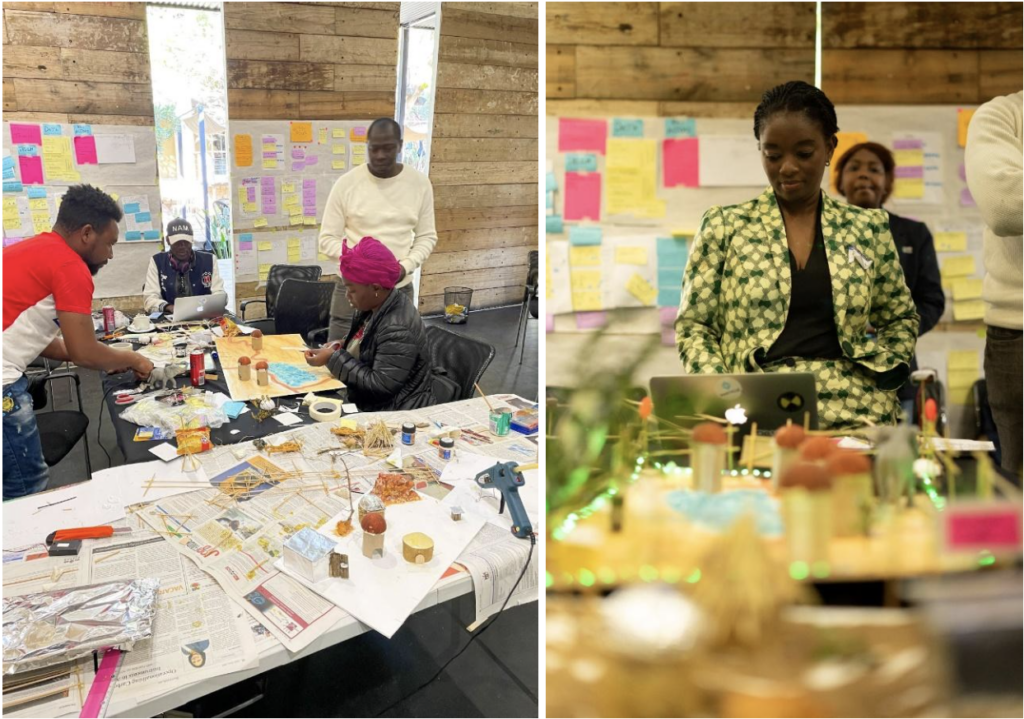 Left: This team work feverishly to build a model of Etosha national park and its smart fence technology. Right: Selma Nasheya prepares for the final presentation.

Most of the prototypes were built in diorama form to demonstrate a full ecosystem. Many used the Particle hardware to good effect and were recording real, live data to the cloud from their models.

On the final day, the prototypes were presented to rave reviews from members of the community—including representatives from the telecommunications industry, professional tour guides, farm owners and the botanical garden.

Reflections on the Trip

My favorite part of the training was working with the lovely and talented Namibian residents who participated in the program. I was blown away by the drive and creativity from the students, who ranged in age from college students to middle age and came from a diverse set of economic and cultural backgrounds. Many were budding entrepreneurs working on their own projects. Those projects ranged from apps to support tourism for domestic national parks and building shipping container classrooms to teach vocational skills to locals. 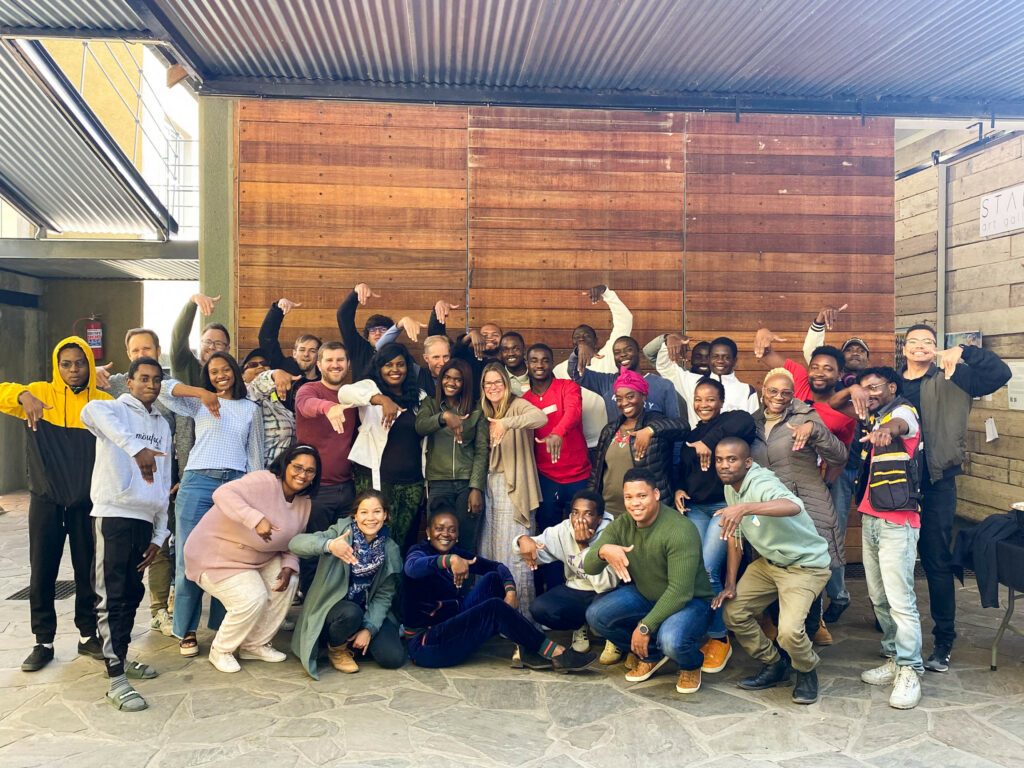 The full cohort of students and trainers pose at The Village in Windhoek.

Many of the participants—victims of the high unemployment rate of about 40 percent for young Namibians—used the training to gain skills in hopes of breaking into the job market or starting their own businesses.

Namibia is a staggeringly beautiful country, due to its natural wonders and the people who live there and take care of it. I am incredibly grateful for the opportunity to visit and contribute my knowledge, and to make some new friends. 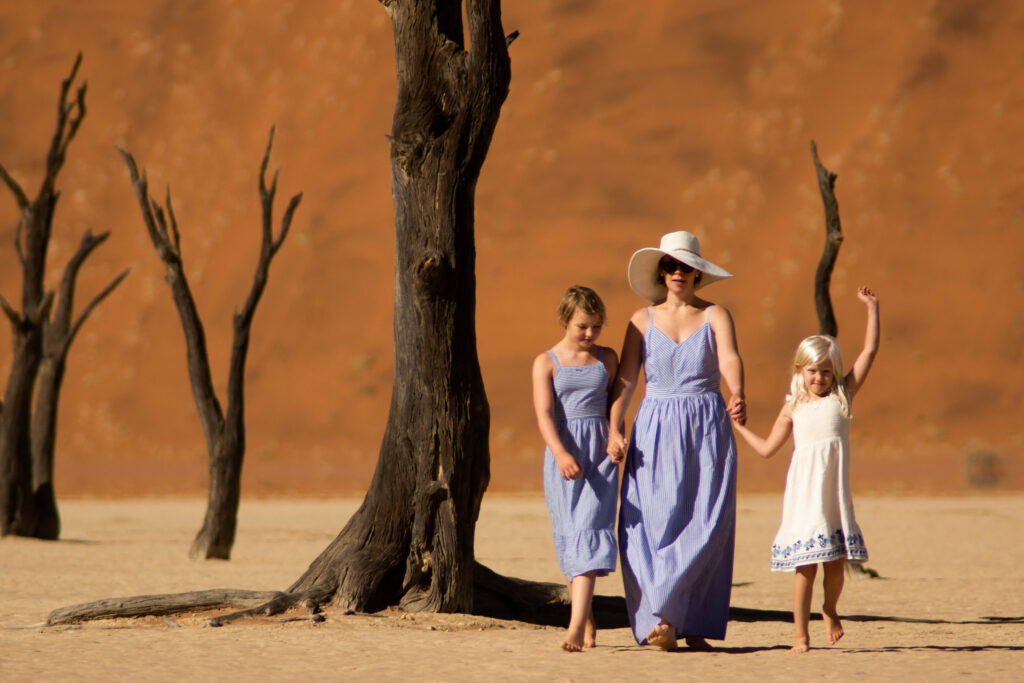 Harper, Kerry and Ivy Losaw take a casual stroll through the Deadvlei.

And, yes, I was able to see the Deadvlei in all its glory. I enjoyed the scene much better with my family in it.