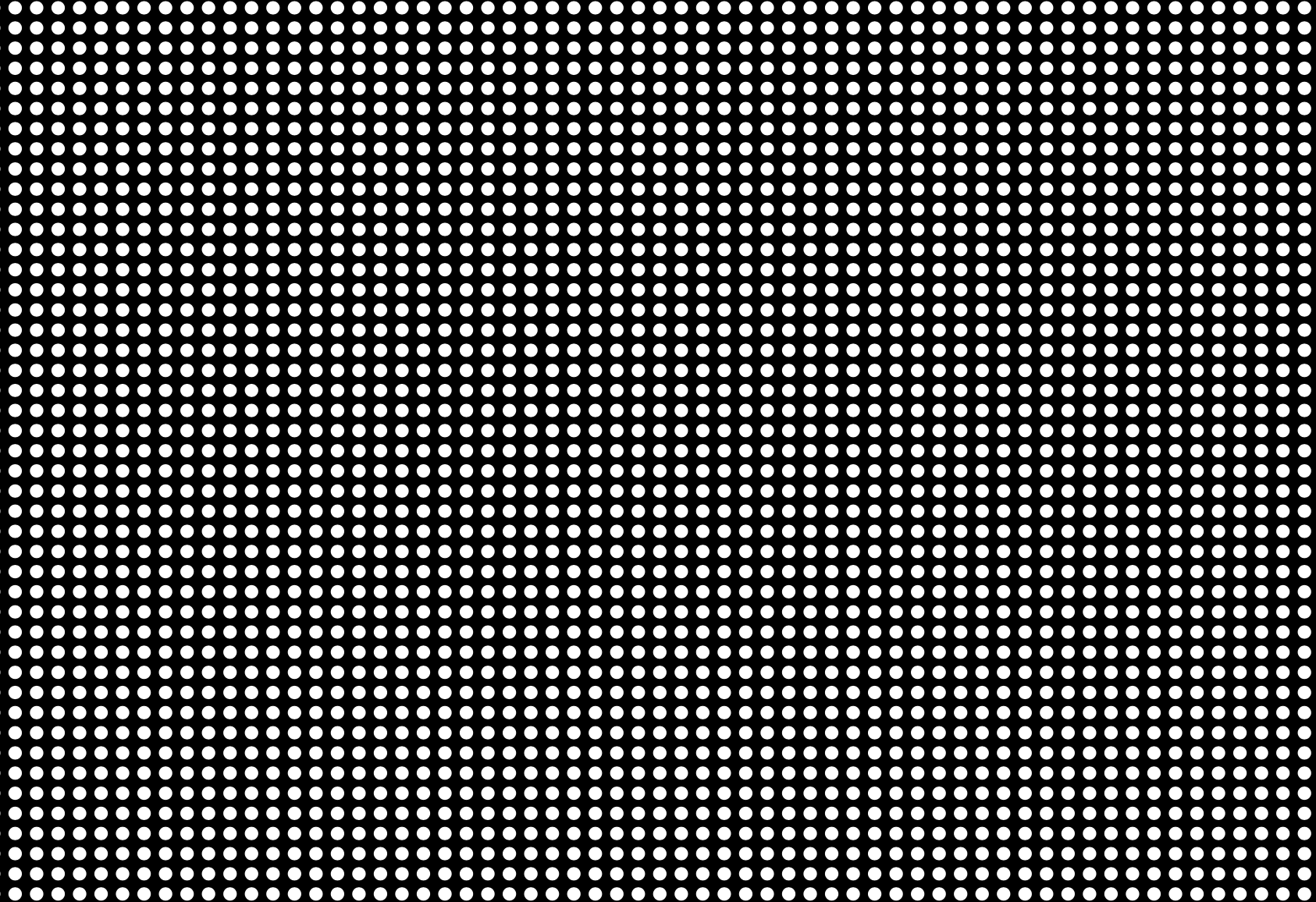 Digital displays offer a “behind the scenes” look at what is going on inside the electronics of a machine. This provides critical information for designers and engineers looking to build or improve upon these products.

As a parent, I hate it when my kids are constantly on their phones. I look for reasons to cut their screen time.
However, as a developer and prototyper, I maximize my screen time. Do as I say, not as I do… right?

The truth is, digital displays – or screens – on prototypes are massively helpful. They give insight into what is going on inside the electronics of a machine.

Of course, you cannot see electrons or the readout of a sensor value. To understand those things, we rely on displays to provide the HMI, human machine interface, and bridge the gap between human and machine.

Different types of displays use different technologies to show numbers, characters or animations in black and white or full color. When the nature of the data of the machine’s state is too complicated for simple lights (usually LEDs), you need a display.

For example, if you need to see the value of the data from a sensor, such as the actual temperature of a refrigerator or frequency setting of an FM radio, a display is required. It’s impossible to convey that type of data effectively in any other way. A single light just won’t cut it.

It is good practice to keep products as simple as possible, and displays are not always needed. If the data being shown to the user are simple, like whether a machine is on or off or charging, this can be done with one or a few LEDs. LEDs in different colors can signal different things, but simplicity is key here, too. Don’t make users memorize a dozen colors and what they represent.

LEDs are also far cheaper than a full display. So if the functionality can be gleaned from them, the product will be less expensive to manufacture in the future.
Here are some common types of displays and how they work so you can choose the best one for your next prototype.

Although singular LEDs can show just a handful of states, when combined into an array they can show characters or even pictures and animations.

A simple and common way to use LEDs for a display is the 7-segment display—where the LEDs are arranged into seven regions. When lit in different patterns, these LEDs can show numbers and limited letters. These are common in beverage machines where the price of an item is shown, or they can be used to show live data like a temperature.

There are many different 7-segment displays (they are actually eight if they include a decimal point) that are compatible with Arduinos and other controllers, but they can use a lot of control pins. Fortunately, there are modules that have chips to control the displays and reduce the amount of pins you need on the control board to just a few. 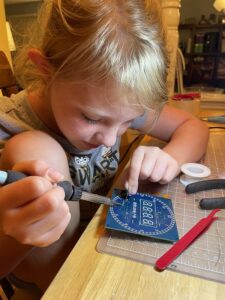 My daughter,Harper, soldering up a PCB with a 7-segment LED display.

LEDs can also be combined into an array or a matrix to extend their capabilities. For example, Amazon Echo devices that run Alexa have an LED ring that changes colors and has effects to show whether it is listening, responding, off-line, or if there is a notification.

LED matrices can be driven by Raspberry Pis. They can be used to scroll data on a marquee or show other relevant data. 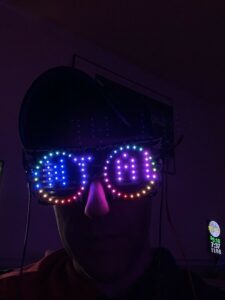 LED arrays can be used to scroll text like these LED glasses, or to show full text and images like the display in the background.

The LCD, short for liquid crystal display, is a relatively old but great technology for displays. Those of a certain age likely experienced LCDs for the first time while using a solar-powered calculator in the 1980s.

The technology behind LCDs is a bit magical. They use a series of polarized lenses that sandwich the liquid crystal goo. Applying electricity changes the state of the liquid crystals to either block the light (so it looks black in that region) or allow light to pass and show the base color of the background. 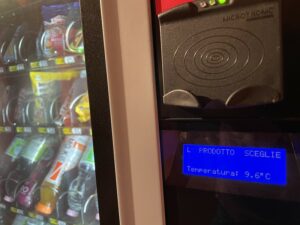 This LCD display is showing the temperature inside this vending machine.

LCDs do not emit light on their own, so they are often combined with a backlight to enhance the contrast of the characters. LCDs are relatively inexpensive and mature technology. They are also easy to control with prototype microcontrollers.

TFT is short for thin-film transistor—a more modern variant of the LCD.

A TFT display has an individual transistor for every pixel, giving more precise control for better overall display quality and resolution. It has a backlight and color mask so it can be used to make full color displays. 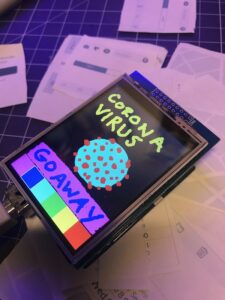 This TFT is driven by an Arduino and has touchscreen input and full color.

TFTs can have a narrow viewing angle, which is a limitation. But, this is helpful for applications where screen privacy is a concern. TFTs for prototyping and production can often be found as a touchscreen, which is helpful when the screen also needs to be used as an input device.

Organic LED technology has a layer of organic material sandwiched between electronic layers that light up when given current. They are capable of being made very small. When red, green and blue are combined in an array, they can make beautiful, full-color displays. The current generation of iPhones even uses OLED displays. 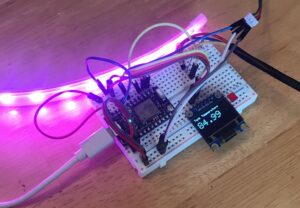 For prototyping, the most common are of a single color—usually white or blue displays that are about the size of a thumb. They are easy to implement with just four wires and simple code that can make characters and animations. For more in-depth projects, there are full color OLED displays that are about 10 times the normal cost.

This brand is a unique display type that came to prominence in the Amazon Kindle.

These typically black-and-white displays do not emit light. They have a soft, almost matte appearance, similar to an Etch-A-Sketch, and a decent approximation for the page of a book. 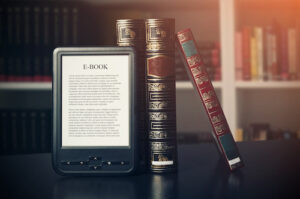 E Ink’s tiny pixels have small spheres of pigment that can be rotated when given current. Once they are in position, they require no additional power and can show the displayed text or image ad infinitum with no additional power.

A rapidly evolving technology, E Ink has some drawbacks. The refresh rate is slow compared to other display technologies and sometimes requires a full reset of the screen back to blank before re-rendering, which can be jarring to a viewer.

Although multi-color E Ink is starting to become more prevalent, the quality is still low and has a washed-out look reminiscent of a Renaissance tapestry. However, because it requires no power after a refresh, it is the most energy-efficient way to have a screen.