The Return of CES Was Anything But Normal 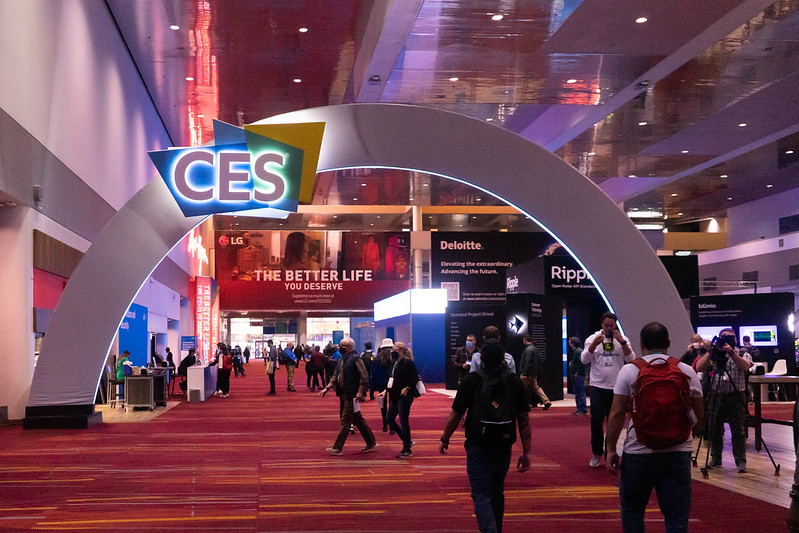 The world’s largest tech show, CES, returned in person in abbreviated form, but vibrant environment prevailed. The quality of innovation exhibited did not suffer a bit. It even felt enhanced, given the 2-year span since the last in-person show.

After a fully virtual edition of CES in 2021 due to COVID-19, the world’s largest trade show returned in person to kick-off 2022. It was far from business as usual.

After the vaccines rolled out and COVID cases decreased throughout the first half of 2021, CES was officially announced as a live event for this year. The hope of normalcy returned to the product development community.

However, the January invitation-only event was a roller-coaster of emotions amid a threat of cancellation. Delta and omicron variants emerged and moved around the world, and large companies began pulling out weeks before the show.

CES reported there were more than 40,000 attendees. According to VentureBeat, attendance was down 73 percent from the previous in-person event in 2020.

Nonetheless, with a schedule that was reduced from four to three days (January 5-7), the consumer electronics community again gathered en masse to show off the latest tech. Here is what it was like to be on the show floor in the first live, post-pandemic edition of CES.

Pre-show logistics were largely unaffected. Signing up was no different—although attendees received early notice they were required to show proof of vaccination, giving anyone who was holding out plenty of time to make that choice.

One of the Enventys Partners clients, 1Ahead Technologies, signed up for the show. 1Ahead is an AI security company with a novel device to replace your video doorbell with an artificial intelligence-controlled access device.

My team has been working on the product for about two years. Preparation to display the device at the show was the same as it would have been pre-pandemic. We had to build prototypes, make props for the booth, figure out how the booth would be laid out and what the pitch was going to be. The only difference was that booths were a little wider and had full walls between them to facilitate social distancing.

In the final week before the show, despite concern that attendance would be low due to large companies like Google and Amazon pulling out, our preparations continued. 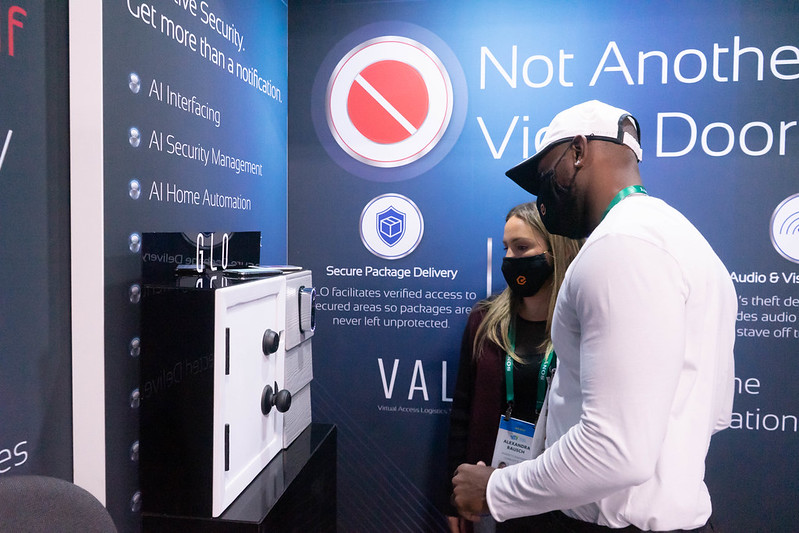 Alex Rausch and Rae McNeil set up the 1Ahead Technologies Glo device. The AI entry-management device was in development for two years before the show.

CES staff did a great job of making attendees feel comfortable at the show. They encouraged showgoers to install the Clear app on their phones to facilitate quick proof of vaccination at the badge pickup sites, and everyone was given Covid home tests to use during the show.

Organizers also took into account the age-old practice of the hands shake. There were stations where attendees could pick up a red, yellow, or green sticker to put on their badges to indicate their degree of comfort with handshakes. 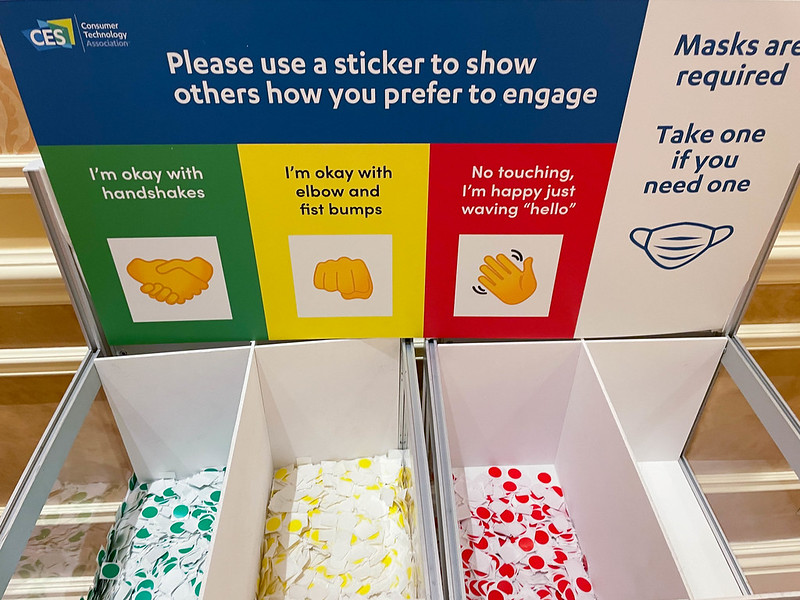 These green, yellow, and red stickers could be placed on your badge to indicate your comfort level with handshakes.

Our Enventys Partners engineering team exhibited in Eureka Park, the area specifically devoted to startups and young companies. Although a few companies did not show up, it was great to see the atmosphere was vibrant.

Aisle space was notably increased to keep foot traffic flowing and to allow people to practice social distancing. Mask wearing was nearly 100 percent; communication between exhibitors and attendees was free and easy. And of course, there was a smorgasbord of swag like pens, lanyards and even masks. 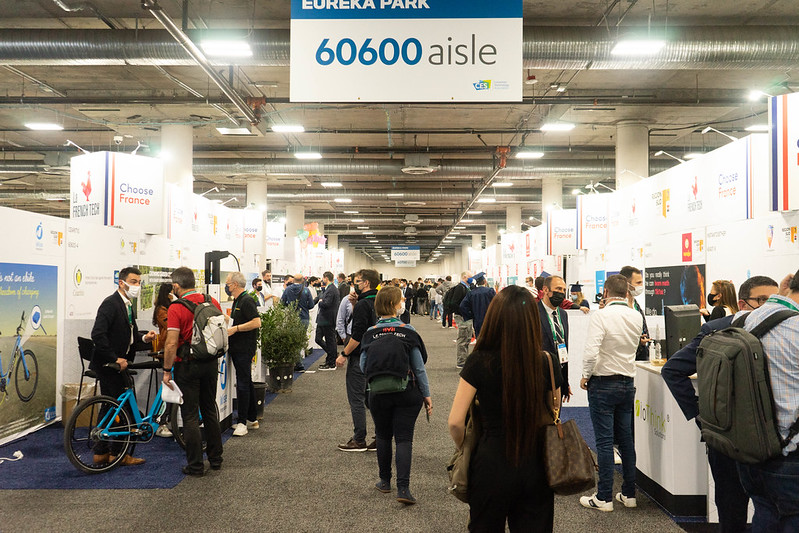 The show floor in Eureka Park featured wider walkways and a vibrant scene.

The quality of innovation exhibited did not suffer a bit. It even felt enhanced, given the 2-year span since the last in-person show.

With the world focused on health and hygiene, innovators had new areas of focus. This was especially true in Eureka Park, where startups from around the world brought health- and pandemic-specific innovations. The larger companies also brought some great innovations.

Electric vehicles and the technology associated with them were huge. Sony debuted its electric car. Of course, there were also lots of innovations in personal transportation, such as e-bikes.

This was also the first year that space tech was exhibited — a category that will surely grow in the coming decade. The only downside was that the show had one less day for attendees to take it all in. 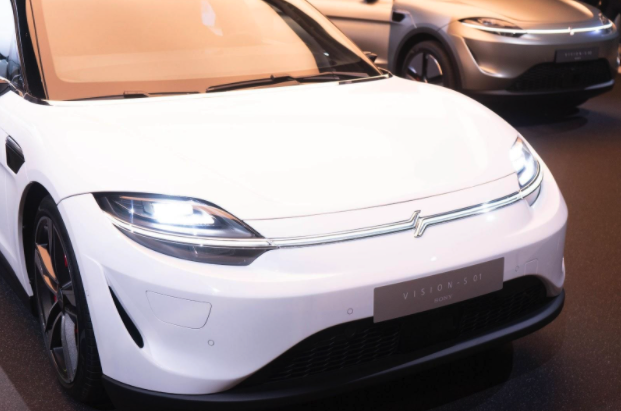 Sony’s new line of electric cars was a star of the show.

A big part of the show—networking opportunities, on the show floor and at after-hours events—was muted but still present.

At the show, the best way to network is to walk around and visit the booths of companies in your category. It was easy to meet people from all over the world in a few hours.

There were also panel presentations for industry professionals to learn about different topics related to the consumer electronics industry. These were great chances to meet others in the field.

After-hours events were also in full swing, although there were fewer of them. Many were held in restaurants or bars. In the Eureka Park area, international groups are known for their pop-up happy hours at the close of show hours; these were back again as well. The Belgian contingency offered the best—free bottles of Stella Artois and a spread of food to offer both the Belgian startups and other exhibitors in Eureka Park. 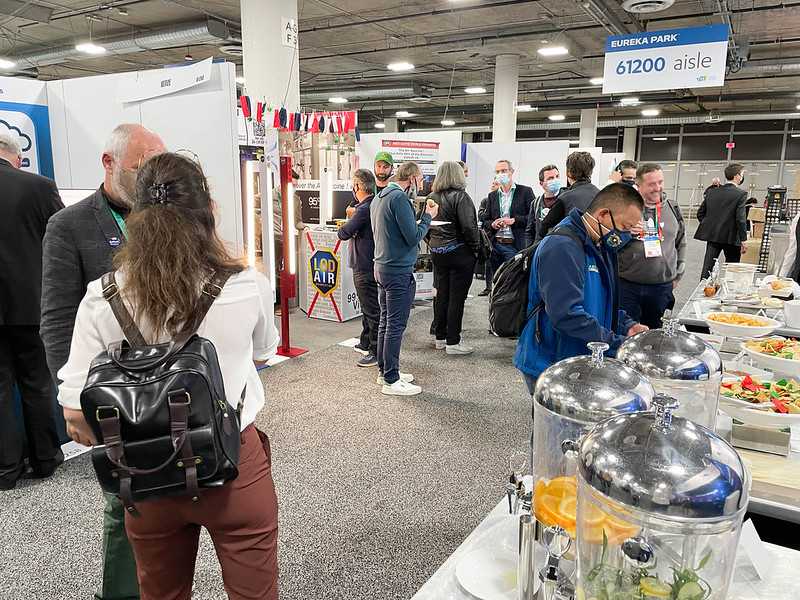 Food and conversation were flowing at the Belgian booth when the show closed.