Answers to Common Questions about Prototyping 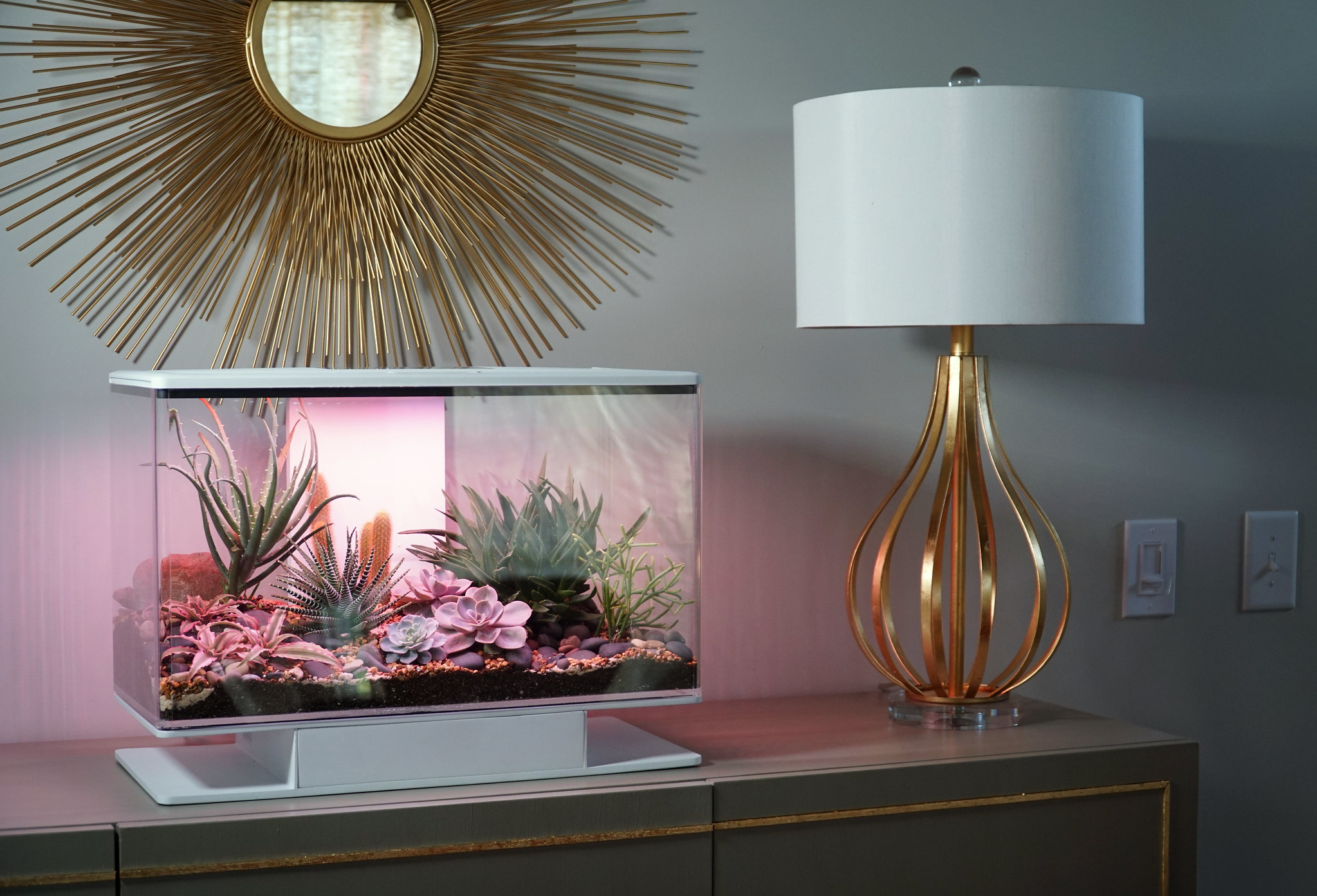 One of the things that sets Enventys Partners apart from other product development agencies is our ability to prototype nearly anything. Whether it’s an IoT device, molded part or soft good, we have the talent and experience to build beautiful and functional prototypes.

One of the things that sets Enventys Partners apart from other product development agencies is our ability to prototype nearly anything. Whether it’s an IoT device, molded part or soft good, we have the talent and experience to build beautiful and functional prototypes. I am fortunate to work with and learn from my great team, and naturally I receive questions about prototyping challenges from readers. This month, I am opening up the column again to answer your burning questions about your prototyping challenges.

If a prototype can demonstrate the function/use of the idea, is it important that it looks exactly the way it is presented as an idea?  -Dave Vaccaro

The answer to this depends on what your goals are for the prototype and who is going to see and use it. If you are early in the development process and still evaluating and refining the core technology, it is often a better strategy to build many non-aesthetic prototypes for function testing. This will allow you to test more iterations at  a lower time and dollar cost. Non-aesthetic models are fine for presenting to potential licensees as it will likely receive a complete facelift to fit with the brand that licenses it. I have seen prototypes of licensed technology that were made from bits of PVC pipe and golf balls.

However, if you are looking for real consumer feedback from a non-controlled audience such as at a trade show, webpage, or crowdfunding campaign, it is best to have a fully fleshed out looks-like/ works like prototype. This will require a bigger time and financial commitment, but is necessary to drum up enthusiasm and pre-sales for the product. 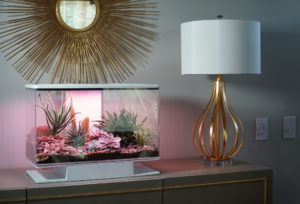 Can I take my prototype item [say hand built of clay, plaster-of-Paris techniques, and fiberglass], the size of a car, submit it to a roto-scan that will convert it to a SolidWorks database, then produce it, say out of laser-cut titanium, or wood, or 3D printer ink (I saw car-sized 3D-print-stuff at last year’s SEMA show!!!)?   -Jeff Pohlman

Large scale prototypes have many challenges. Most of the devices that we build in the Enventys Partners shop are for personal consumer use and usually smaller than a basketball. These products have parts that are small enough to 3D print or machine with standard equipment. However, we do plenty of large scale prototypes too, and the techniques we use vary depending on the requirements of the project.

One  of our favorite techniques we use for large plastic parts is to split them into manageable sizes for standard size mills. The CAD file is puzzled to make a series of smaller parts and they are then machined from blocks of plastic. The finished parts are assembled and bonded back together to form the desired shape. The parts have great strength and are easy to sand and paint to give them a great finish.

Another option is to use large format 3D printing. Service bureaus like Arrival 3D have monster machines to build large parts for the aerospace and automotive industries and can handle car-sized parts. Expect that large 3D prints come with a proportionately large pricetag.

If you are trying to make parts that are not particularly beautiful, you can DIY them by carving foam insulation. Pieces of foam can be bonded together to form large blocks. CAD files can be printed on large format 2D plotters to provide cut templates that can be taped over the foam block as a guide to make accurate cuts. 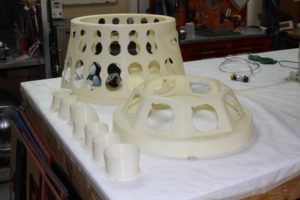 These large clothes basket prototypes were split into smaller pieces before being bonded back together.

Have you ever made a round pocket in sheet metal using a homemade punch press or die? Its about 2.5 inches in diameter by 1/4” deep, in 20gauge steel plate. I used a vice two different size sockets and a sledge hammer. Messed my wrist tendons up bad but better now. I bought one of those 1 ton arbor presses and its not powerful enough. -Kenneth Rainbolt

What you are trying to do is prototype a die stamping operation, which is varsity level prototyping. The first time I ever saw stamping being used for production parts was on a Sesame Street episode where they showed how saxophones are made. It is a very pleasing 2 minute video that is well preserved on YouTube and shows the tubes being cut and stamped from raw sheet material.

Production stamping machines are typically rated for many tons and driven by high power electric motors. Fortunately, there is a fairly straightforward calculation to figure out how much force you need to form sheet metal. It takes into account the diameter of the form, the thickness, and the strength of the material, and there are tables available for quick lookup. For your shape, you need about 7 tons of force, so I am not surprised you hurt yourself trying to form it by hand with such a small press. Your best bet would be to reach out to a metal former in your area, or to one of the national prototype parts houses like Rapid Manufacturing for a quote. (https://rapidmanufacturing.com/rapid-sheet-metal/) 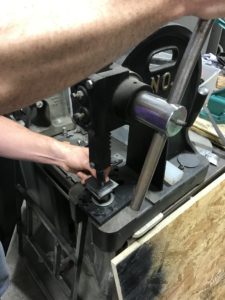 The arbor press in the Enventys Partners shop is used often for making small metal parts.

What prototyping resources does EP have at its disposal? -Derrick James

We like to say that we have enough tools and equipment to build one of anything that comes across our desks. We have a suite of desktop and industrial 3D printers, a waterjet cutter, laser cutter, CNC machines, tube benders, and a vacuum former. There is molding equipment to do urethane and silicone parts and a whole suite of hand tools like saws, drill presses, and benders, not to mention a paint booth to facilitate finishing work. All that is on the physical product side, but we also have a wealth of electronics development tools that are housed in a newly renovated space in the building. It is a cornucopia of capabilities and the envy of garage inventors. 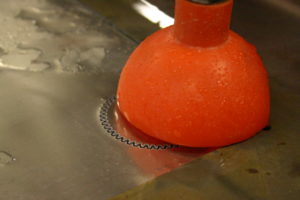 The OMAX waterjet is one of many awesome machines resident in the Enventys Partners shop.