THE MAGIC SPOON THAT TOOK KICKSTARTER BY STORM

Rahul Agarwal thought of the idea for Polygons while pursuing a degree in design at a renowned university in India. The concept came to him after a fellow senior gave the advice “Do not tackle designs that have reached the final stage of their evolution. For example, a spoon”. Contrary to this advice, Agarwal dedicated his efforts to reinventing the wheel or, in this case, the measuring spoon. 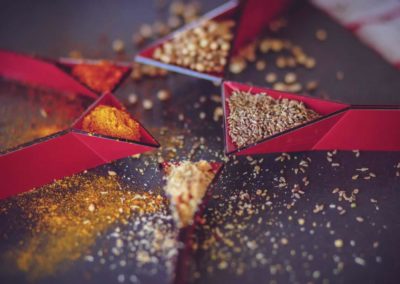 After extensively testing with various shapes and materials, he arrived at an optimal measuring spoon solution—Polygons.

Polygons’ pre-launch period is what lead to the initial success of the campaign. Beginning with zero email marketing leads, Polygons’ subscriber list quickly grew thanks to a boosted video of the product. When the campaign officially launched, Enventys Partners secured over 28,000 names for their email marketing list, which helped raise over $100,000 in the first 24 hours.

The campaign’s momentum also helped increase the amount of engagement on social media. Again, starting from scratch with zero followers on any social platform, Polygons Facebook page ended the campaign with 20,390 likes and increased its Twitter following by 274%. When it came to Polygons’ paid advertisements, we were also able to maintain low cost-per-conversion using a frugal budget.

Not only did Enventys Partners enable Polygons to become an internet sensation, our team helped shatter their crowdfunding goal. While it helps to have a unique product that’s affordable, having the support of a dedicated team of professionals ultimately contributed to Polygons’ huge success. By the end of the campaign, Polygons’ raised $1,022,120, which was 10,221% of their $10,000 goal. The Enventys Partners team secured coverage in multiple top-tier outlets, maintained excellent ROI throughout and increased social following by a whopping 20,664%.