The Character of Exploding Kittens: Why Reputation Matters in Crowdfunding 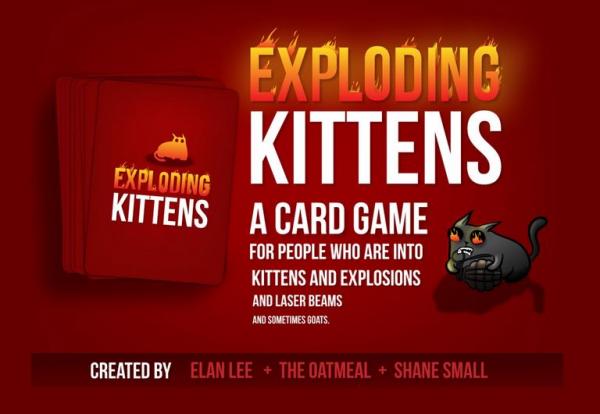 For every successful Kickstarter, many more will never hit their funding goal. Crowdfunding is risky business, as you are attempting to present your product, your brand, and your reputation to the world in a short amount of time. It’s easy for a projec …

For every successful Kickstarter, many more will never hit their funding goal. Crowdfunding is risky business, as you are attempting to present your product, your brand, and your reputation to the world in a short amount of time. It’s easy for a project to mismanage its expectations, lose sight of the goal, and likely to create a negative impression on backers.

Many funded projects succeed after their initial Kickstarter campaign because they kept on a single path from start to finish, with a clear vision of their product as well as their own limitations. They did the legwork and the research at the beginning, maintained visibility on social media as well as stayed in communication with backers, and came through in the end with everything they’d promised, establishing their brand from start to finish as one with integrity.

Playing a game of chance with hazardous cats may not be everybody’s bowl of kibble, but earlier this year, over 200,000 people jumped onboard to help pull the trigger on a Kickstarter project for a card game called Exploding Kittens. The game is a highly strategic kitty-powered version of Russian Roulette where players take turns drawing cards until someone draws an exploding kitten and loses the game.

“We’re keeping it as simple as possible: support our project and in return, we’ll send you the playable game.”

And that’s exactly what they did.

Though the project creators were already well-known in their circles, fame isn’t always the way to success (as Run-DMC’s Darryl McDaniels can tell you). They made good use of their contacts, however, and created a solid foundation of e-mails and social media influencers to share their story about “a card game for people who are into kittens and explosions and laser beams and sometimes goats.”

The Exploding Kittens team also made sure to have a video that was short and easy to understand. The game was well thought-out, and the images were fun. They showed a potential backer how much work they had already done on the game (including failed versions) and their background with other games, showing both their level of commitment and their previous experience.

While it’s important to recruit new fans, you don’t want to lose sight of current backers, as they can prove to be your biggest evangelists. Silence during a campaign is never golden, and the Exploding Kittens team made sure to post regular updates, answer questions, share milestones, and keep backers engaged. The channels of communication were always open.

Rewards are one of the best parts of backing a Kickstarter campaign. While it’s nice to give everyone a chance to contribute no matter what their budget, it can mean headaches down the road, as you try to coordinate production and shipping of products through multiple manufacturers. It can also delay your original project. Besides, if you’re working on publishing a new book, why deal with trying to print shot glasses, t-shirts or iPhone covers? Are you a kiosk in the mall?

The Exploding Kittens rewards were simple, and not cluttered with items unrelated to the project. The team also kept the stretch goals in line with the original game, offering upgrades to all backers once goals were met.

Not only did Exploding Kittens hit their delivery date, they utilized some of the unexpected over-funding to provide surprise extras for backers (I personally loved the special packaging and personalized letter that was included with my set). Because of the clear communication throughout the campaign, backers were willing to share the success with their social media circles. In addition, the team continued to keep everyone in the loop during testing, production and shipping, which drove even more attention to the project after the fact (and likely helped secure their quick move to Amazon). They met expectations, and then exceeded them, ensuring incredible word of mouth, and establishing their brand as one to be trusted.

There are any number of issues that can hamper production on an item, from changes in material, shifts in suppliers, or challenges in shipping – even the record-holding Pebble Smartwatch was not immune. While crowdfunding supporters tend to allow for some leniency on missed delivery dates, it’s important to remember that you’re probably building a brand, and you want to start off on the right foot. One survey found that 87 percent of orders delivered in five days or less resulted in a “promoter” – a customer that is more likely to be a repeat buyer or brand evangelist, and refer more customers via word-of-mouth marketing. Repeated delays leave a bad taste in everyone’s mouth, and will impact your reputation negatively. Exploding Kittens exemplified how to do things the right way, from start to finish.

We live in a world dominated by social media, and a business that doesn’t keep their promise has nowhere to hide. As Warren Buffett said, “It takes 20 years to build a reputation and five minutes to ruin it. If you think about that, you’ll do things differently.”