Our Favorite Crowdfunding Projects of 2015 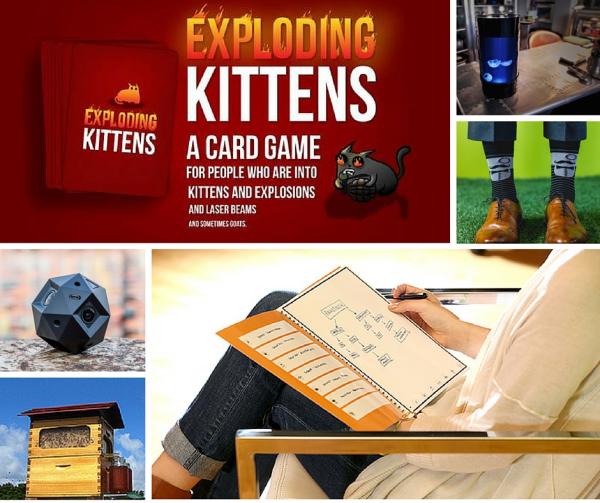 When it comes to crowdfunding, 2015 was a year for the books. The year brought us projects such as Pebble Time, the Flow Hive, BauBax, Exploding Kittens and many, many more. However, among all these great projects, we were able to narrow down our top p …

When it comes to crowdfunding, 2015 was a year for the books. The year brought us projects such as Pebble Time, the Flow Hive, BauBax, Exploding Kittens and many, many more.

However, among all these great projects, we were able to narrow down our top picks. Here are our team’s favorite crowdfunding projects of 2015.

Flow Hive – “Flow™ is the most significant innovation in beekeeping since 1852.”

This revolutionary beehive invention, allows you to harvest honey without opening the hive and with minimal disturbance to the bees.

We may lose a lot more than honey if bees are unable to cope with the changing climate and increasing demand for agricultural land. The world’s 25,000 bee species are responsible for pollinating a third of the food we eat. If we lose bees, then we risk the food security of ourselves, and all the other animals that depend on bee-pollinated crops for survival.

I really enjoyed watching Exploding Kittens for a few reasons. I’m a big fan of card games, and a follower of Matthew Inman and The Oatmeal, so personally it was an exciting project. However, it was also interesting to watch from a marketing and fulfillment perspective – throughout their overwhelming success, they always kept backers updated in a fun, interactive, and informative way. Beyond that, they still managed to deliver on time, which was a pretty impressive feat considering the volume that they sold.

Pillars of Eternity – Because deep down I’m still a D&D nerd and this game promised so much nostalgia…then delivered. It is my favorite game…now if I only had time to play it.

It’s hard to choose just one, but I think the coolest crowdfunding project of 2015 is Sphericam 2, the 4K 360º video camera for virtual reality. While this isn’t something that I would use myself to create VR content, I know that it is really going to change virtual reality as we know it. If you haven’t taken Oculus Rift for a spin, you’re missing out! It allows you to sit in your living room, but feel like you’re anywhere in the world, or even in an incredible fictional place. THAT is the future!

Rocketbook Wave, the cloud-ready microwavable notebook was my favorite crowdfunding project of 2015. I love the idea behind this product because it’s different from any other notebook I’ve seen. Not only can you write in this notebook and send your notes to the cloud using their app, you have the ability to completely erase all pages by using your microwave!

** From start to finish, a perfect example of how to run a campaign.  I would absolutely back anything else they decided to launch.

** I’m a giant geek, so I would have backed this anyway, but the video updates were smart, fun and the perfect way to connect with backers.

** The quality images made it easy to grab and keep attention on an ad level.

And in general I love how Omaze connects celebrities, fans and charities. For example:

I think this is a project that is an absolute perfect fit for crowdfunding.

Fans had been calling for a Super Troopers sequel for years, so the guys behind Broken Lizard put the fate of the movie in the hands of their fans – to a rousing success.

They created a bunch of great perks and kept the backers updated with new videos throughout the campaign – turning the entire process into somewhat of an interactive experience that takes place in the Super Troopers universe.

NASA space suit restoration – The restoration and conservation of the space suit worn by the first American to travel into space, Alan Shepard, was funded in large part by the Smithsonian Museum’s first Kickstarter campaign. Funds will be used to restore the suit’s 21 layers of protective material, as well as the digitization of the suit, allowing a 3D replica of the suit to be printed by anyone. The restored suit will be ready for public viewing in 2019 in celebration of the 50th anniversary of the first moon landing. The fact that the museum sought out financial support from Kickstarter is both innovative and clever, not to mention we have a moral obligation to preserve our history.

The Good Type Book – Lettering and typography is fascinating, but it is a dying art. What began as a hobby by an artist on Instagram has grown into a large community of type supporters. Goodtype, The Book, aims to celebrate the typography design, while also funding a scholarship program for future artists.

My favorite crowdfunding project of 2015 is one of our own: Rocketbook. I love this project because it is so useful for me personally. Sometimes I prefer to take notes by hand, but I like to keep everything organized by client on my computer. Rocketbook will let me easily digitize all my hand-written notes. I can’t wait to get mine!

Tubshroom has been one of my favorites of the year.  I love that it shows when an inventor builds a better solution to an everyday problem, it can do well on crowdfunding sites.

The fact that it was a project that Enventys Partners came in mid-campaign on Kickstarter and helped take it from $9,200 to $90K using primarily Facebook Ads is even better!

Freaker Feet is an awesome local company who I’ve supported for a while now. They ran a really fun campaign that perfectly exemplified who they are as a company. Plus they threw in some freebies and a personalized doodle in my (on-time-delivered) package!

I loved the Ivee project for a few reasons: it wasn’t afraid to take on a giant, Amazon Echo, and in my opinion it has better features. From a marketing standpoint, I really admire the way that they positioned the product on the campaign page- it was completely user-centric!

NudeAudio Super-M – I REALLY love the look and feel of their Kickstarter page. It’s so unified and flows very nicely when you scroll through it. Their photography is amazing, it’s reasonably priced and they offer a lot of options when it comes to color and customization. It’s just an all around cool project since you can take it in water and sand and in your back pocket.

I loved Uthermic – they had an awesome product, and they were a fun team to work with.

One of my favorite crowdfunding projects of 2015 was easily Exploding Kittens. Not only did I like the premise of their game, but I also really liked how they managed their Kickstarter campaign overall. They were extremely creative with their page and their updates, and they were very upfront and transparent with their backers. I think this ultimately lead to building a strong Exploding Kittens community, which lead to a successful campaign.

The Jellyfish Aquarium by Jellyfish Art! It is just awesome, I wish I had one on my desk right now…

Rumpl – I like this project because it’s simply just a blanket but for some reason I HAVE TO HAVE ONE, which I think speaks a lot to their marketing team. Also, the fact that they were able to successfully do a stealth launch is awesome.

I’d have to say TubShroom is my favorite project this year.

Getting a bathtub drain clogged is more frustrating than looking for your keys for 10 minutes only to discover that they were in your pocket the whole time!

It’s such a simple solution to a big problem.  I commend them.