Should You Market Test Before Launching a Product? 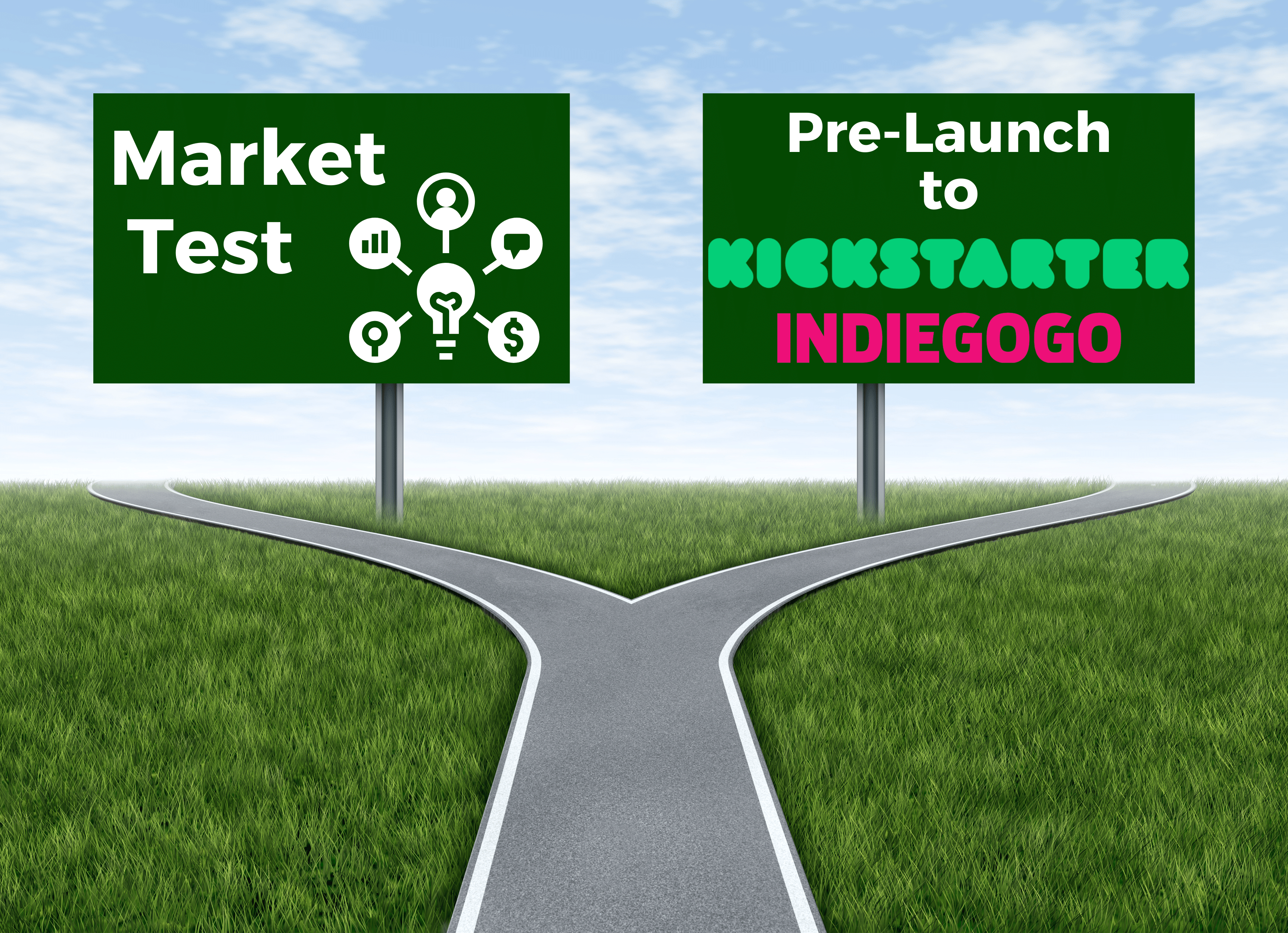 To market test, or not to market test? That is the question. No one is questioning whether it’s important to gain market validation before hitting launch on your campaign. The question is how do you do it, and what exactly can you expect to learn? The answers aren’t as clear-cut as you might think.

Market Test or Pre-Launch? Which is best?

Ah, the market test. A slightly over-hyped, and over-simplified process for understanding how a product may or may not perform once launched to the public.

We understand wanting to predict the future. We’re asked all the time if we believe in market tests. Except in rare situations, our answer is no. We don’t believe every campaign should market test before launch. We understand the hesitancy in investing in a product launch, which is why we believe a thoughtful pre-launch that flows directly into a campaign.

Ultimately, we do believe it’s important to do your research, prepare, plan and strategize for a successful launch. But we don’t believe a market test is the only, or best, way to do that when it comes to crowdfunding.

Why a Market Test Isn’t Always the Answer

If a client wants a market test, we – can – run one. But we don’t recommend it in most cases. Here’s why:

Our standard pre-launch process can, and does, achieve the same goal as a market test. A pre-launch strategy also flows directly into the campaign, increasing the likelihood of converting leads to backers and insights into dollars.

Launching a product is always risky. In the weeks or months leading up to a launch, the goal is to mitigate the risk as much as possible. Learn as much as you can about the audience you wish to target, and the audience that your product actually resonates with. Decisions about how to move forward need to be informed by data.

When people look to market test their idea they’re seeking metrics that give them an idea of what they can expect once their campaign is live. They want to know that if they hit certain benchmarks during a market test, they’ll be assured to achieve success during the live campaign.

It doesn’t always work that way. At least not clearly.

Before a campaign launches, you want to gather qualitative feedback from your target audience about their interest in the product and your anticipated price point. You’ll also want to evaluate metrics surrounding ad performance and email marketing campaign success.

Some of the metrics we look for include:

Want to learn more about how we’d prepare your product for launch?

Data Can Be Misleading

Sometimes, a market test doesn’t tell the whole story of how a campaign might do once it’s live. Why? It’s complicated.

The market test can be limited because there isn’t a true “purchase” or “pre-order” promise at the end. It’s simply a fact-finding mission. We’ve seen clients “pass” their market tests according to the metrics alone, but fail to achieve success during their campaigns. We’ve also had market tests that failed on their KPIs, but went on to succeed.

This summer, a client with a rehabilitation device to provide deep calf stretches and help alleviate pain from plantar fasciitis came to us with the desire to market test before launching their campaign. We ran a four-week market test and learned a lot about the audience that was likely to buy their product.

In the survey, 86% of respondents said they were either “extremely interested” or “somewhat interested” in purchasing the product. More than 60% said they thought it would be extremely helpful in their lives. This is EXCELLENT feedback and would indicate success. But the story doesn’t end there.

The KPIs for ads and emails made the decision harder. 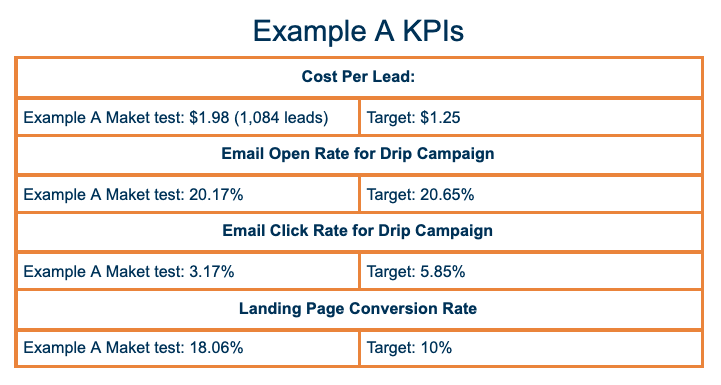 On nearly every metric, this campaign failed the market test. But, feedback in the surveys was wrong. Our advice was to forgo a crowdfunding campaign and consider other avenues of launch. In this case, the client was adamant about pursuing crowdfunding. The campaign launched and raised more than $97,000 with the support of 856 backers. A major success.

This spring, a client with a self-heating smart mug came to us wanting to predict how successful their campaign would be with a market test. During the market test, we surveyed more than 2,000 leads and received a 4% response rate. Those who responded were overwhelmingly interested in the product. The KPIs for email and advertising also pointed to a high probability of success during the crowdfunding campaign. 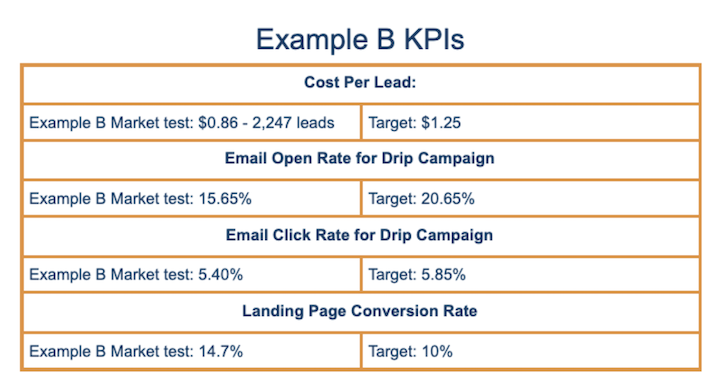 The campaign launched and quickly surpassed its public funding goal in nine hours. This helped them gain early traction. It steadily grew in funding until the campaign creators chose to cancel it the day before their Kickstarter deadline. They ultimately raised more than $67,000 but were hoping for a higher figure to help them cover initial production costs.

Product C began pre-launch over the holidays in 2020. Not exactly the best time to pre-launch a product for a variety of reasons. We employed a pre-launch strategy with the intention of launching the campaign immediately after. During pre-launch, the KPIs told us that the product was not likely to see success during the campaign. While we expected slightly elevated CPLs because of the holidays, every metric was off target. 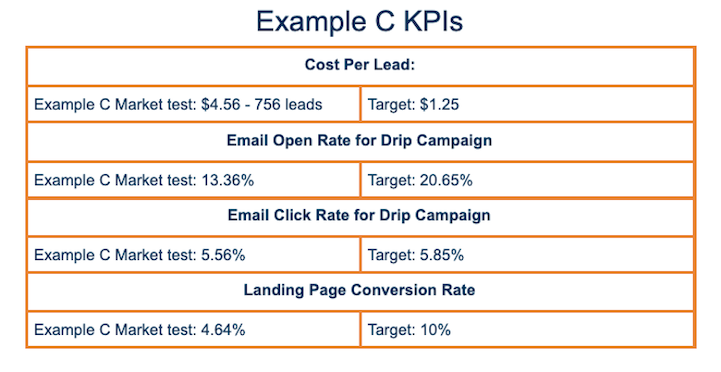 With a pre-launch CPL at almost $5, we advised our client to delay the launch by two weeks to allow extra time for the holiday season to pass and our advertising team to test additional angles. We used learnings from every step of prelaunch to make changes to the landing page, too. Because this particular product isn’t easily explained in still ad images, our team tested a 75-second video ad and was able to increase traction leading to the launch.

By the end of the crowdfunding campaign, the company had raised more than $212K with the support of 1,100 backers. Had they opted for a market test, they would have failed and never launched their business.

A Pre-launch Strategy is a Better Option

Because the data, both KPI and qualitative, from surveys don’t always accurately predict how successful a campaign will be, we recommend a different approach to crowdfunding as a part of your business strategy.

Crowdfunding is essentially a market test. Because crowdfunding campaigns offer pre-orders, if you’ve done your research and homework before launching, it can act as a good market test tool where you can zero in on understanding what resonates with your customer. To set the campaign itself up for success, we recommend a pre-launch approach.

Pre-launch looks like a market test, but in the end, you flow seamlessly into the campaign launch. This is an important distinction from a market test because this approach eliminates the discussions and delays between lead generation and the time to convert.

In pre-launch, your ads serve a purpose that can ultimately benefit your business. If your pre-launch ads are successful at generating leads, you’ll learn through surveys how to reach new audiences once your campaign is live. You’ll also be spending that money nurturing customers who will have a higher conversion rate.

In a market test, the waiting between the end of the test and the pick-up once a decision is made can be enough time for leads to go cold. Why waste your money?

What if Pre-launch KPIs Aren’t at Our Targets?

This happens all the time. The beauty of a pre-launch strategy is its flexibility and the ability for continual improvement. If the KPIs aren’t where you’d like them, but they’re trending in the right direction over the course of a pre-launch, it’s reasonable to believe you’ll continue learning and tweaking until you reach the benchmarks you’re after.

During a pre-launch, your marketing team will be looking critically as they test ad copy, messaging, assets and audiences to understand what is resonating, and perfect it before launch. Market tests aren’t about perfecting ads that convert, they’re about gathering information. While a subtle difference, it’s a critical one.

We believe all good products have the ability to succeed on crowdfunding if they’re marketed the right way. The truth is, it’s hard to do alone, and it takes experts who know the right tools and tricks. Enventys Partners has helped campaign creators raise more than $300 million in crowdfunding. Ready to get started? Reach out to us today!