Communication is Key: Tips For Building an Authentic Community 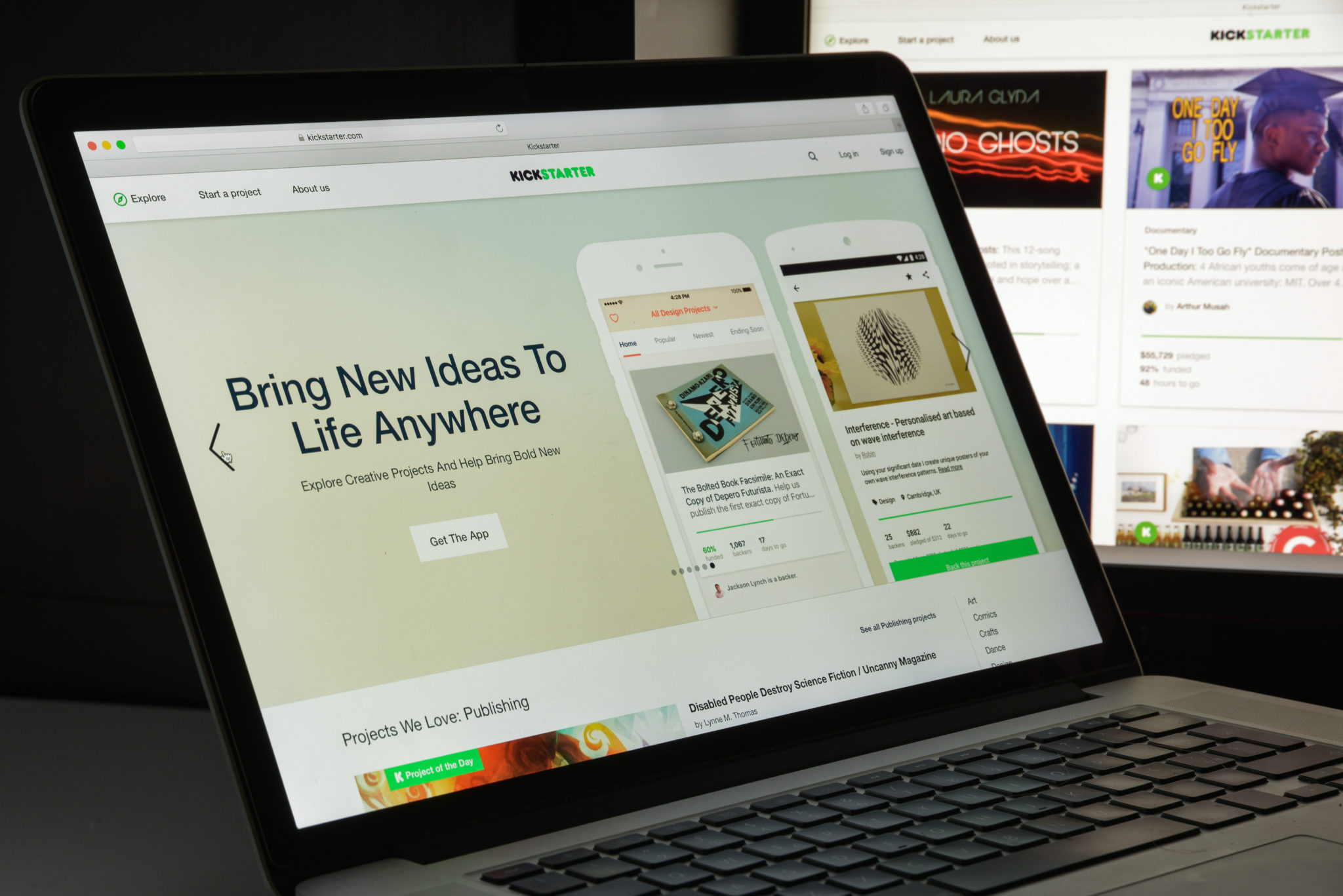 Crowdfunding campaigns provide a great opportunity for emerging brands to build a community of enthusiastic supporters quickly. But because crowdfunding is risky, it’s important to nurture your backer community with regular, transparent updates. From launch day through product delivery, keep your backers informed of your progress. How you do this will determine your credibility and set you up for success (or failure) long after the campaign is over.

Communication is Key: Tips For Building an Authentic Community

Crowdfunding campaigns provide a great opportunity for emerging brands to build a community of enthusiastic supporters quickly. But because crowdfunding is risky, it’s important to nurture your backer community with regular, transparent updates. From launch day through product delivery, keep your backers informed of your progress. How you do this will determine your credibility and set you up for success (or failure) long after the campaign is over.

Congratulations. You hit the launch button on your crowdfunding campaign and are excitedly watching as backers from across the world support your project. Now what? Building a community with these early supporters is important, and the easiest way to do that is through clear, transparent communication.

Within the Kickstarter platform, there are two easy ways to communicate with backers, and potential backers, as the campaign progresses: comments and updates. Once a project is live, it’s common to see backers ask questions and make suggestions about a product. How creators respond can make or break the new relationship they’re trying to build with their community of supporters.

Nearly every successful campaign receives comments from backers. Clothing campaigns will receive questions about materials, sizing and colors. Tech projects will get all sorts of questions about the technical specifics of their products.

The importance of answering backers as they ask questions and provide feedback cannot be overstated. It is essential.

Do’s and Don’ts of Comments

A great example of a creator who uses the comments section to connect with backers is Mobile Pixels Inc. Their most recent campaign, DUEX Lite and DUEX Plus, received a number of questions about compatibility, technical specifications and usage. The team responded to nearly every comment from specific use-cases to general questions. 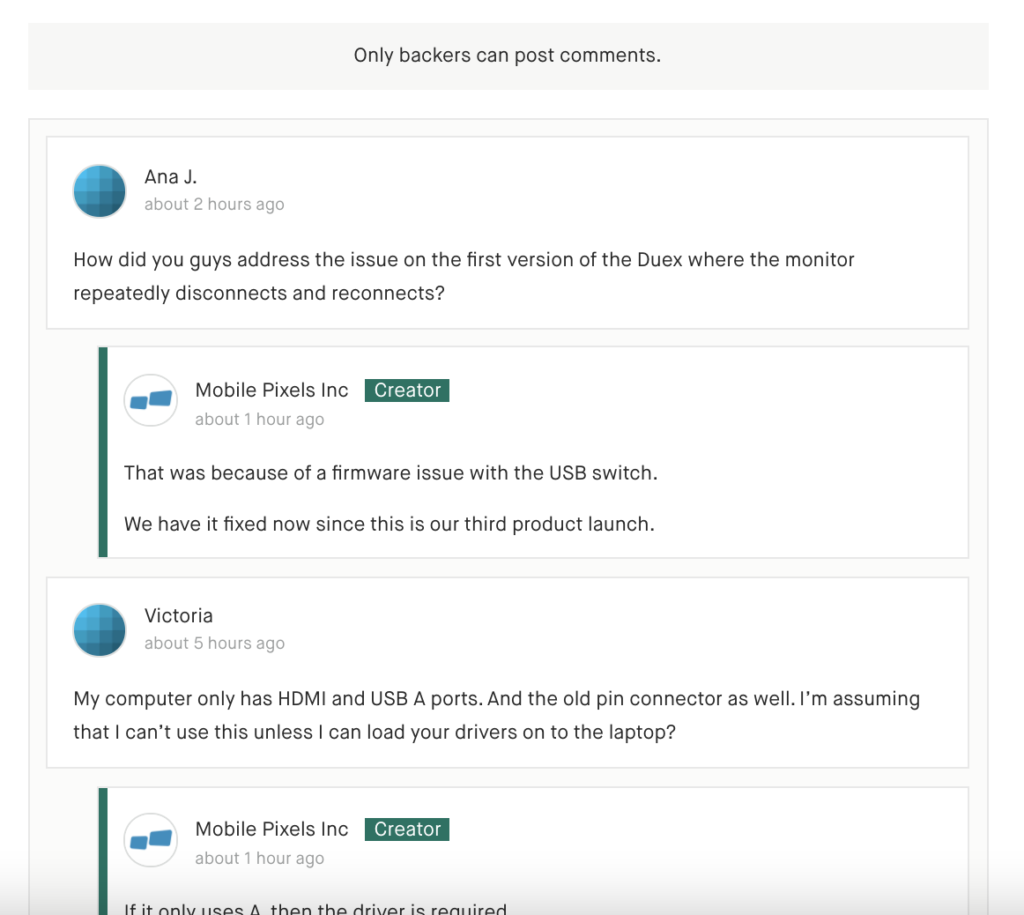 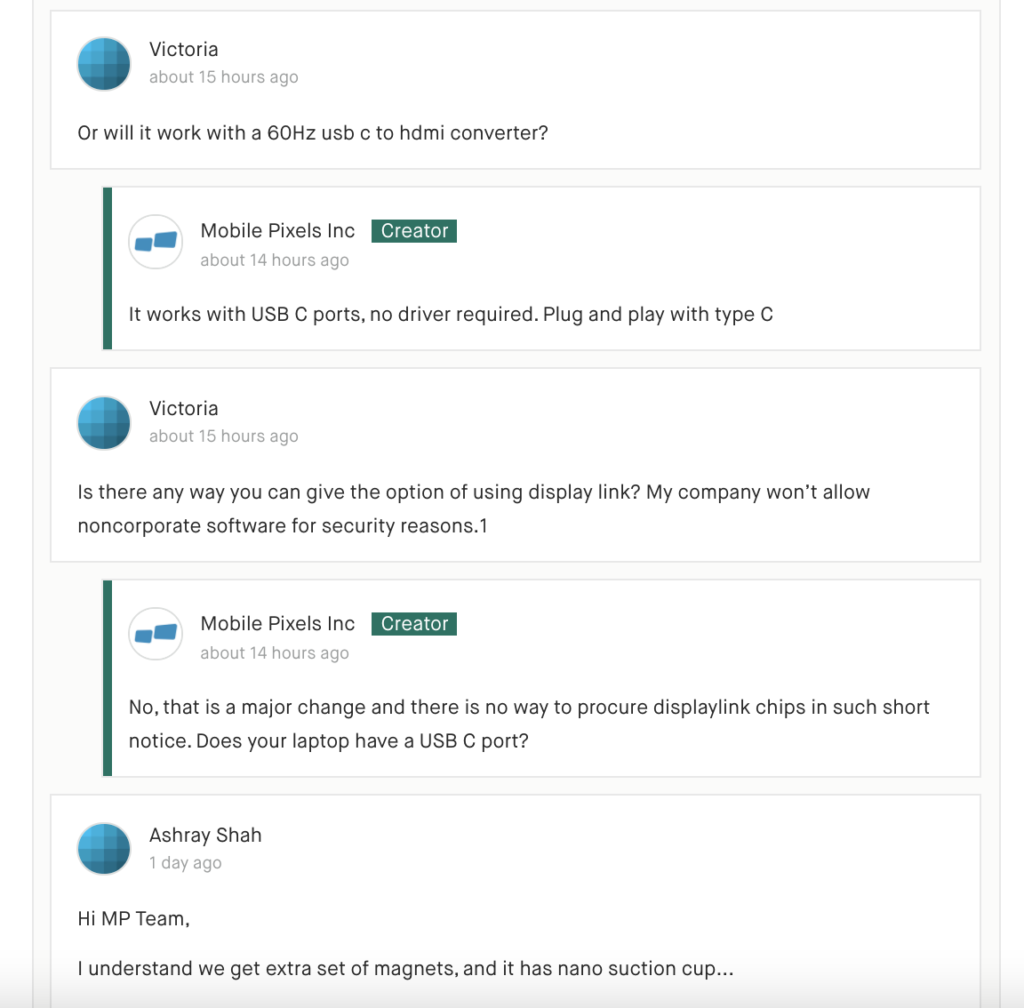 It’s worth noting that the reverse is also true. Creators who fail to answer questions receive a flurry of comments questioning their legitimacy. This can, and often does, result in cancelled pledges and a withdrawing of support.

One of the easiest ways to communicate with your backers is regularly posting backer updates on your campaign page. Backer updates are a great way to keep your backers engaged in the campaign and informed about anything that’s happening behind the scenes.

While the campaign is live, updates can feature milestones in funding, answers to frequently asked questions and the announcement of stretch goals. These updates are emailed to backers and also live on the campaign page itself, so it’s important to check spelling, hyperlinks and tone before publishing. Post-campaign updates provide critical information to backers about when they can expect their product.

Do’s and Don’ts of Backer Updates

Most campaigns hit bumps along the way when they go to fulfill their rewards. It’s part of the process, and backers are overwhelmingly understanding…if they’re kept in the loop. Sometimes delays are anticipated, but other times, something totally unexpected happens. How creators handle these events can make or break their relationship to backers.

Swish, a novel cocktail jigger, is a prime example of how to communicate openly and honestly when something no one could predict happens. After they completed their campaign, the creators published notes thanking their backers and updating them when manufacturing was completed. Then the unexpected happened. 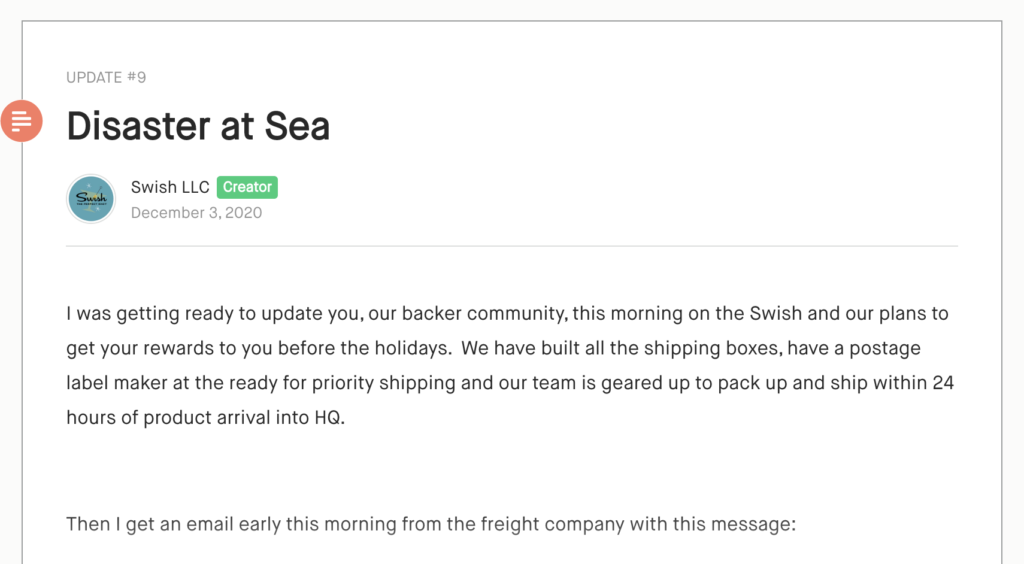 The Swish team had lined up everything to hit a tight deadline and deliver products in time for the holiday season. But then, the cargo ship containing the first batch of products hit a storm in the Pacific Ocean. More than 1,900 containers were either lost at sea, or damaged aboard the ship. The creator of Swish told backers what had happened, was human in his response, and informed them of what plan their plan B was.

Five days after their first “disaster” update, the team sent a second one with more information. 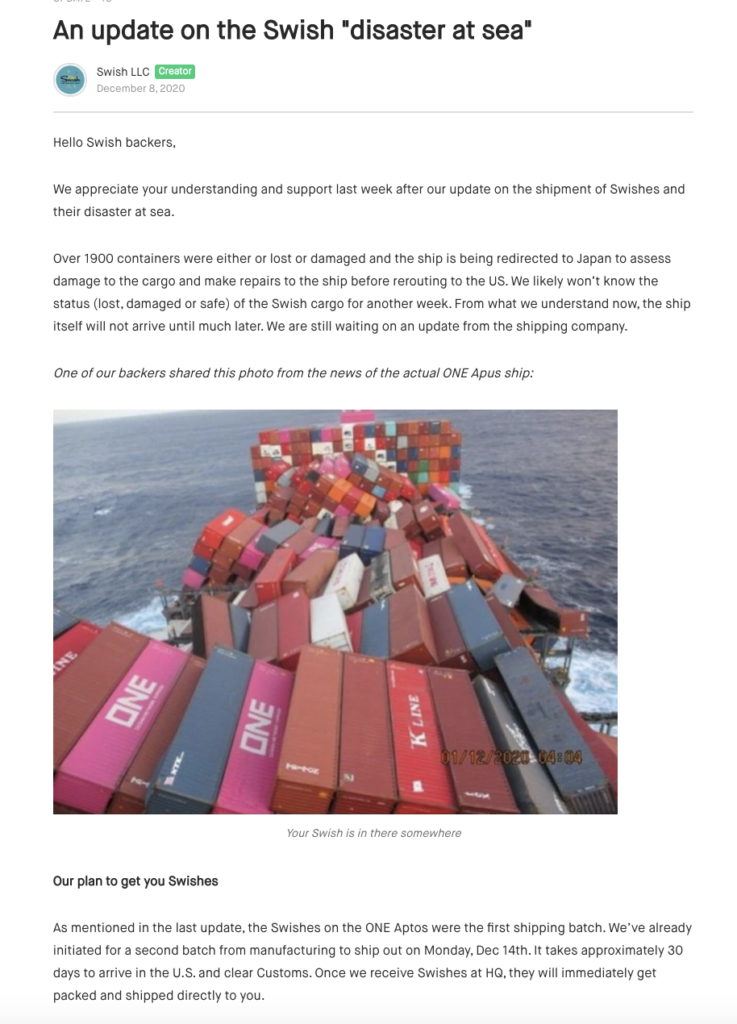 This real-time communication with backers served them well. Comments on the updates thanked the creator for keeping them in the loop and acknowledged the “freak nature” of this situation. While the disappointment was unanimous, the campaign kept backers from becoming angry.

Once the situation had resolved, the team updated backers once final shipping had begun. Backers responded with messages of thanks, including this one:

The process of building your Kickstarter community only begins with the launch button. By engaging with your backers, you’ll turn early adopters into loyal fans.

Are you ready to launch your crowdfunding campaign? Does the thought of crafting updates seem daunting? If you need help getting started, reach out to Enventys Partners. We work with a wide variety of projects in every category and would love to partner with you to bring your idea to life.