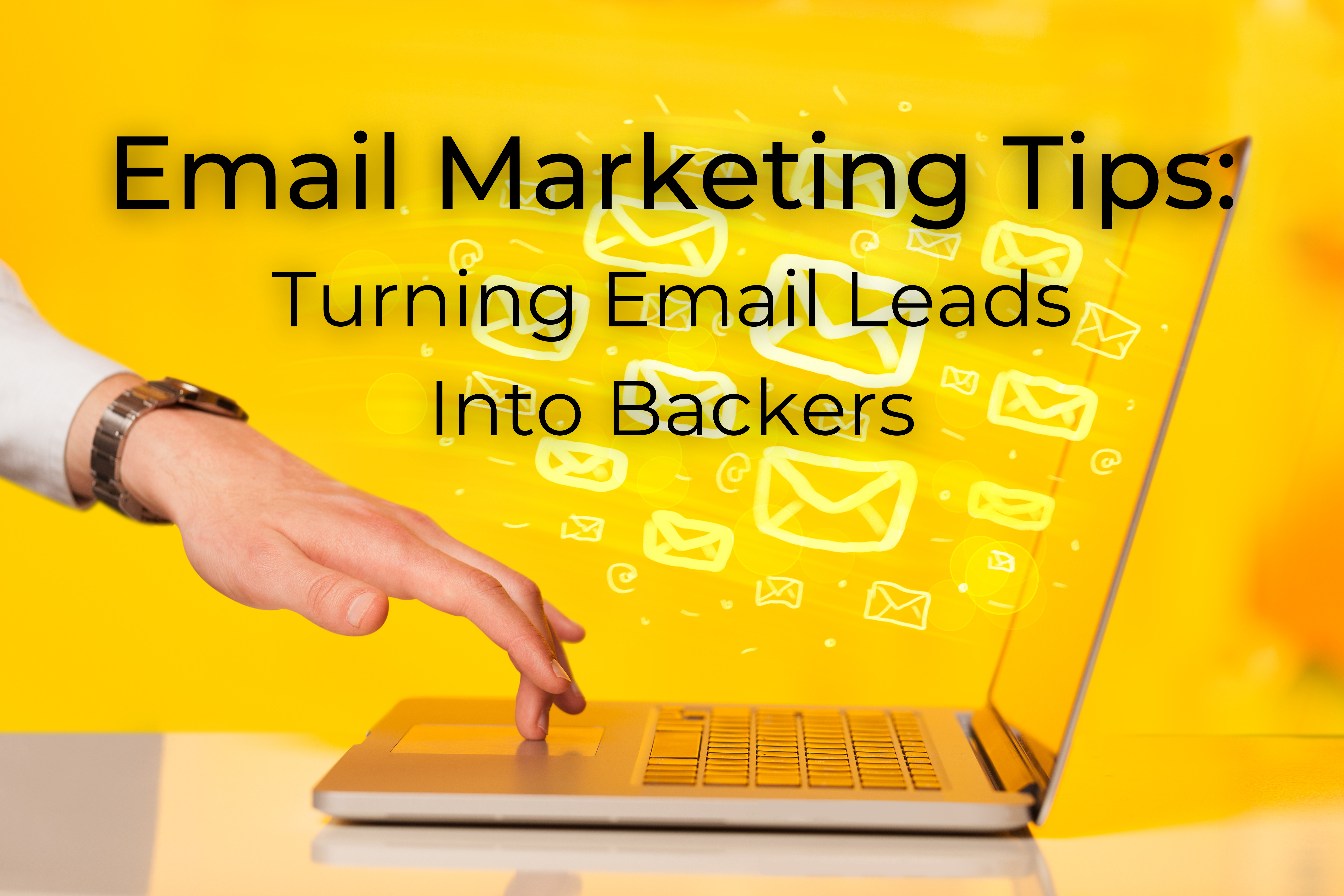 Email marketing plays a huge role in determining the success of a crowdfunding campaign. Effective email marketing turns leads into backers and backers into loyal fans. Learn how we recommend generating those leads and converting them into backers.

Ask anyone who has run a successful crowdfunding campaign and they’ll tell you that email marketing plays a huge role in determining whether or not the campaign is a success.

The top-performing campaigns will likely have an email list comprised of:

Leads gathered during pre-launch play an important role in a campaign’s success. They can directly impact launch day conversions and continue to provide positive value throughout the duration of a campaign.

During pre-launch, it is beneficial to capture targeted email addresses. At Enventys Partners, we are able to do this by displaying Facebook ads to those that have already backed crowdfunding campaigns. Our database of over 15 million backers allows us to display ads for products similar to campaigns they have already backed. Our conversion rates on these ads tend to be very cost-effective.

There are two primary types of ads run during the lead generation phase. The first is purely for lead generation. This ad asks the recipient to opt-in by completing a form within the ad itself. The second type of ad takes the recipient to a separate landing page where their email address is captured in exchange for an incentive. Common incentives include launch day discounts or entries into a giveaway contest.

The end result is a database of email addresses of those that have expressed interest in the product.

Once leads are captured, it’s important to warm them up. Share product benefits and features, and help potential customers become more familiar with the product creator and the story about how and why the product was developed.

This series of emails is automatically sent as a drip campaign during pre-launch until two or three days before launch. Prior to launch, you should share emails about the launch day rewards and prices, and the day before launch, we will send a “Launch Alert” email informing subscribers of the pending launch the next day.

When launch day arrives, the email leads play a very important role. A strong start is crucial for campaign success. The email list gathered during pre-launch will be your best source for conversions outside of friends and family. It is recommended that project creators offer a special launch day reward for 24-48 hours, allowing leads to back the campaign at the lowest price possible.

At Enventys Partners, We recommend sending an email shortly after launch, and a second email late in the day. The emails remind leads that the product has launched and allow them to pre-order at the lowest price ever. It also gives a nudge that time is limited if they want the best deals. Typically, campaigns see more than half of all email conversions within the first 48 hours after launch.

Launch day rewards provide a financial incentive for leads to back the campaign. After that, Super Early Bird or Early Bird rewards can also provide additional incentives for backers that are price-focused. Once the financial incentives are depleted, the best way to convert pre-launch leads is through education. By sending emails focused on product features and benefits, subscribers may find value or become interested in some aspect of the product that they had not considered and may back the campaign based on what they learned.

During the last few days of the campaign, converting the hold-outs should be your goal. Those that have been on the fence the entire campaign but haven’t committed yet need a push to do so. Campaigns that focus on the urgency of backing immediately to not miss out tend to perform best. Restating key product features, benefits, and value can provide the much-needed push to finally convince the email subscriber to pre-order.

Once a campaign is complete, your job isn’t done. It is important to review your campaign analytics to determine how your email campaigns performed. Review which types of emails drove the most engagement and conversions, which subject lines performed best, what times of day worked best, and discover other information from the data to gain valuable insight.

After the campaign ends, project creators can now move into a regular marketing schedule if they wish to communicate with non-backer leads while they are in product manufacturing or distribution. It’s important to remember to reach out again when you have your product ready, as some leads that may not have had the ability or interest to back the product during the crowdfunding campaign may be interested once the product is readily available.

Overwhelmed? Enventys Partners is a Mailchimp Pro Partner and would love to help you set up an automated email campaign to support your crowdfunding product launch. Reach out to us today and let’s get started!