A Call for Media Literacy

Recent events in social media have Facebook once again apologizing for behavior that, while within their terms of service, pushed against ethical boundaries. Yes, we’re discussing Facebook’s recent admission that they manipulated 700,000 individuals’ n …

Recent events in social media have Facebook once again apologizing for behavior that, while within their terms of service, pushed against ethical boundaries. Yes, we’re discussing Facebook’s recent admission that they manipulated 700,000 individuals’ newsfeeds to see if it would affect the test subject’s mood. As one would expect, people who saw more positive news items responded more positively while the reverse happened for the unlucky saps that were flooded with negative news items.

Luckily, only a few cut themselves before they were quickly marketed by antidepressant manufacturers who sold them a solution.

While the last sentence above is a joke, it illustrates the ethical boundary that Facebook’s experiment stretched. The backlash has been harsh. Critics claim that participant consent was required prior to conducting the experiment. Facebook countered that its terms of service for using the website preemptively provide consent. Their response boils down to one fact: all of Facebook is a commercial experiment.

We see salient points from both sides. FB is a commercial venture that you can use for free. By using the service, you agree to their terms. Those terms explicitly state that they can test and modify your experience to see which combinations of factors make them more money. Companies and agencies do the same thing on their sites. We make modifications and test them to see if they increase sales or leads. We do it so much it even has its own acronym: CRO (Conversion Rate Optimization).

But while FB’s mission is overtly commercial, the general public sees it as just another web property. Take Google’s search results for example: 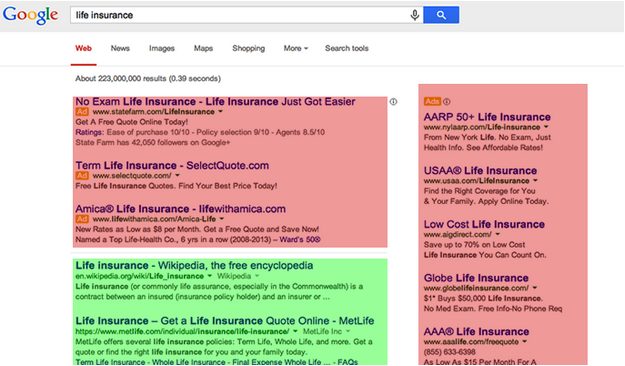 The (red) ad space (while growing) is clearly labeled as such. We know that the (green) organic space is free of advertisements. The green space is the service Google provides the general public in the hopes that we will use their website and occasionally click on the paid ads. 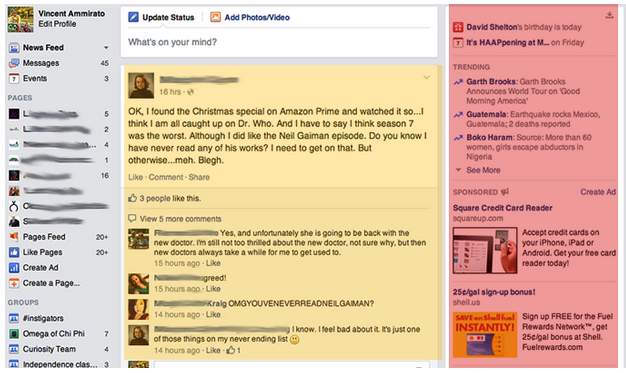 This isn’t sponsored, right!?? I like sci-fi and Neil Gaiman and was looking at his website earlier today. Is FB experimenting with my Gaiman affinity levels for commercial purposes?

Both FB and Google share the paid ad space on the right side but the middle is where FB gets dicey. We all know they mix sponsored posts with non-commercial ones but, with Facebook’s newest revelation about their most recent experiment, the newsfeed gets even more cloudy…and some would say insidious.

Falsification of “The Neighbor Effect”

It is well known that our neighbors’ purchase behaviors affect our own. This was extremely well documented in a 2003 car buying study headed by Mark Grinblatt of UCLA Berkeley. In the study it was found that new car purchases were most heavily influenced by the recent purchase decisions of close neighbors. If Mike next door buys a Ford Taurus then I’m going to seriously consider the same make and model.

But what if Chevy was able to keep that information secret from me? FB could, without any warning, decide to allow General Motors to pay for the right to “experiment” with my feed and block all references of Ford from my stream.

A Call for Media Literacy

I took an intro journalism course in college where the theme was “Is Media the Message?” The premise was that pure journalism is dying out because virtually every news outlet is beholden to a larger corporate entity. The most obvious connection is to advertisers. You would never, for example, see negative press on Coke or Delta in the Atlanta Journal and Constitution because both Coke and Delta are local and massive advertisers in the paper.

That was twenty years before the mega mergers between telecoms, broadcasters, and content creators. Nowadays the likes of AT&T/DirecTV, Time Warner/AOL, or Comcast/NBC make it even more difficult to separate the message from the medium.

Furthermore, we’ve got preschoolers that are brand literate enough to recite the name of 50+ brands before they know the difference between advertisements and entertainment. They are bombarded on all fronts with the idea that buying things brings happiness. On a personal note, when she was five, my daughter broke my heart when she pointed at her belly and asked “am I too fat?”

Now, more than ever, we need to educate ourselves and our children on the roles and purposes of media. A great place to start is the Media Literacy Project. Their stated goals are to:

So while Facebook’s experiments border on the unethical, they are well within their rights to conduct them. If we want to be a part of the largest social media website on the planet, we must abide by their terms of use. If you decide to still participate, be aware that you are part of an experiment and FB has a history of not providing informed consent. Educate yourself on the principles of media literacy and maybe even share that knowledge…with your friends on Facebook.