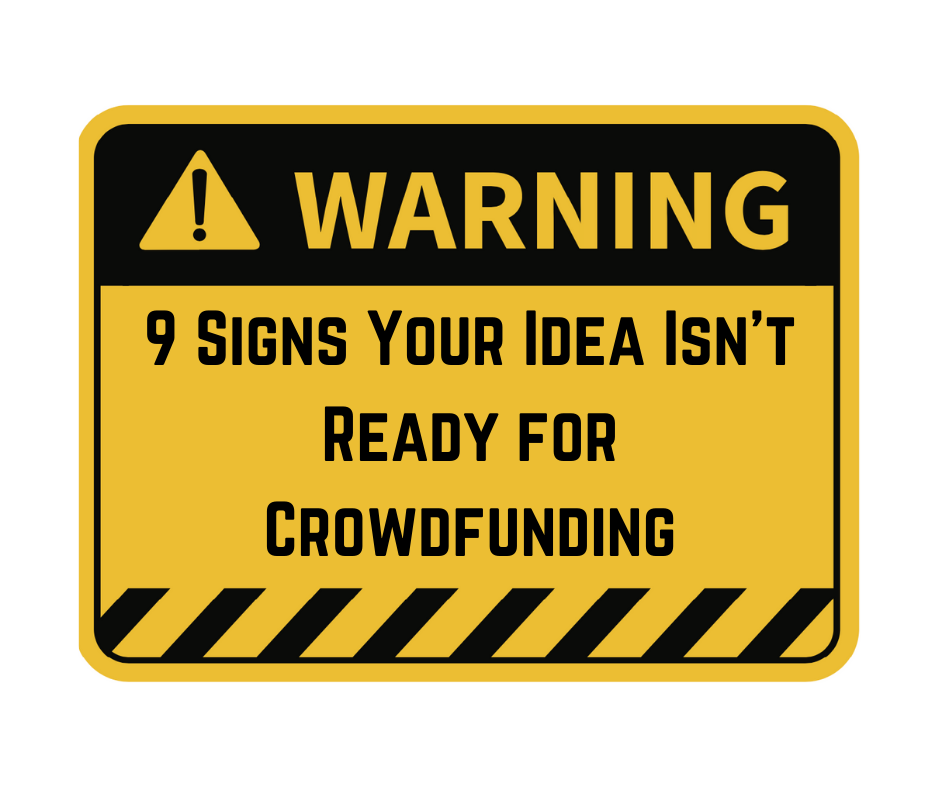 Every creator wants to be successful. If they didn’t, they wouldn’t be crowdfunding. But not all projects or ideas are created equal. It’s true, crowdfunding can act as a great equalizer, giving entrepreneurs and small teams a chance to achieve success. Look for these warning signs that your campaign isn’t ready to launch.

If you’re thinking of crowdfunding your idea, you’ve come to the right place. Crowdfunding remains a fantastic avenue to test new ideas while generating necessary funds to bring them to life. It’s an alluring concept. There’s much more that goes into achieving success than a solid idea and pressing “go.” Before you hit launch, make sure you’ve done your homework and aren’t exhibiting any of these 9 crowdfunding warning signs.

Do you remember giving presentations in school? There was always one person who didn’t do the research and was clearly faking their way through. While they may have survived school, failure to research your idea won’t yield success in crowdfunding.

What do you need to research? From who your ideal customer is to a rough understanding of your cost to manufacture and pricing schemes, these basics shouldn’t be a guessing game when you launch your crowdfunding campaign. It’s important to know what pricepoint competing products are already offered at. What are customers willing to pay? Can you manufacture and turn a profit within those limits? If not, how can you justify the higher price point to potential backers?

Researching who your customers are is also critical. In understanding who they are, you’ll know how to communicate with them and turn them into loyal customers.

Entrepreneurs, by nature, tend to be passionate people. That passion is particularly important for crowdfunding. Be involved with your campaign. It’s apparent to backers when a creator is only launching a product to turn a profit. Passionate creators simply act differently. They engage with their backers in comments and campaign updates. Their excitement is infectious.

The most successful projects on Kickstarter and Indiegogo are the ones that have unique selling points that are well articulated. If your idea is an improvement upon something that customers may be familiar with, articulate the changes you’ve made well. There are very few products with zero competitors. If a creator is unable to distinguish themselves clearly from other products, they’ll never attract backers.

Do you have a physical, working prototype for your product? If not, you may want to wait to crowdfund until you do. Kickstarter requires a working prototype to be displayed and demonstrated clearly on the campaign page.

Even if the platforms themselves didn’t require a prototype, backers are increasingly choosy about the campaigns they support. A working prototype helps backers envision using your product and shows them that your idea, and brand, is legitimate. You’ll also want that prototype so you can create compelling photo and video assets.

High-quality assets are a must if you want to succeed in crowdfunding. It’s one thing to tell a good story and make a million promises, but without compelling imagery, backers will go elsewhere. The assets you create will be used in paid advertising, on the campaign page itself and can be given to interested members of the press. We recommend having a variety of product and lifestyle shots that show the features of the product and how it is intended to be used.

The campaign video itself is another important asset. While you can take several approaches to create an engaging video, it’s important to clearly communicate what your product is and how it works. The keys to a successful video aren’t that different than the keys to overall campaign success. Shorter videos that clearly introduce your product are more effective at converting viewers to backers. Check out these 7 tips for the perfect campaign video for more information.

While the goal of any crowdfunding campaign is to raise the funds needed to bring the product to market, it’s important to set reasonable funding goals for the campaign itself. Internally, you may want to raise $500,000 but if a more modest raise will enable you to cover initial manufacturing costs, it’s worth setting a lower public goal.

Determining these figures should be done carefully. You want to ensure that you have enough money to deliver your rewards, but also a low enough goal that it’s easily achievable. Campaigns that are “fully funded” instill confidence in backers and ultimately end up raising even more money.

A narrowly defined customer is a must for any business. But a product that is designed for only a very narrow use, or with a very small group of customers in mind, isn’t generally a fit for crowdfunding. That’s not to say a product like that can’t see success with a traditional ecommerce approach, but crowdfunding requires a broader appeal. Products for infants sometimes struggle because of the nature of delayed reward fulfillment. The most successful crowdfunding campaigns are products that have broader appeal and aren’t time-sensitive for the consumer.

Just like it’s important to have a reasonable funding goal for your campaign, how you price your rewards can make or break success. Creators are sometimes fixated on the idea of turning huge profits from their campaigns. This often leads to markups that make reward prices too high for the crowdfunding backer to support. The goal in pricing rewards should be to cover costs associated with the campaign itself and the initial production runs of the product.

Sometimes a product is expensive to make. That’s ok. But it’s really important to be transparent with backers about the true costs of manufacturing the product. Especially if the product is several hundred dollars or more. Backers expect deep discounts for their early support, so if a product is pricey, tell them why.

It takes money to make money. It’s a hard truth. Successful campaigns didn’t get that way without advertising budgets that matched their growth. If all of the other pieces, including assets, clear USP, and brand story are in place, an advertising budget should be allocated to help the campaign succeed. Generally, we advise clients to allocate 15% of the amount they want to raise to advertising. This allows marketers the opportunity to scale and test ads to achieve the highest ROI possible.

Does your campaign avoid all of these warning signs? If so, you’re ready to launch, and we’d love to help. If you’ve realized you’re not quite ready to launch the campaign, that’s ok, too. Whether you need help with prototyping, asset creation, defining your USP or pricing your rewards, we’re here to help.